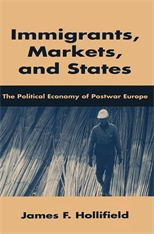 The Political Economy of Postwar Europe

“Hollifield’s book explores virtually every major feature of the migration debate in western Europe: the debate over citizenship; the rise of anti-migrant right wing parties; the economic effects of migration on industrial development; whether liberal democracies can control immigration; and whether convergence between France and Germany on migration policies is possible as Europe unites. Anyone concerned with these critical issues will want to read Hollifield’s Immigrants, Markets, and States.”—Myron Weiner, Massachusetts Institute of Technology

“Given the intensifying international migration crisis, Hollifield’s pessimistic conclusions with respect to the capacity of liberal democracies to control immigration will frighten those who view immigration as a threat and give heart to those activists who never met an immigrant they didn’t like.”—Gary P. Freeman, The University of Texas at Austin

“For the first time in history, the world’s major industrial democracies have become magnets for immigrants. This immigration is controversial in the U.S. and Japan, and has reached crisis proportions in France and Germany. In this wide-ranging book, Hollifield argues that the spread of liberal ideas such as free markets and individual rights limits the ability of industrial democracies to control immigration. This important book explains why international migration will become a more important feature of international economics and politics.”—Philip Martin, University of California, Davis

“The breakdown of the Berlin Wall and the breakup of the socialist Eastern bloc confront Europe, and others such as Israel and even the United States, with a renewal of large-scale immigration into continental Europe that, from 1945 to 1973, fed the golden age of economic growth. James Hollifield’s book, Immigrants, Markets, and States, which covers legal and illegal immigration into Germany, and especially France—and, to a lesser extent, the United States—provides an instructive background to the problems ahead. It is a scholarly study of political economy that highlights the politics, law, and sociology of the recent experience; on all scores, it merits attention.”—Charles P. Kindleberger, emeritus, Massachusetts Institute of Technology