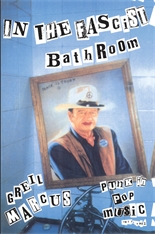 In the Fascist Bathroom

“The dean of rock criticism, Greil Marcus, has been analysing the populist and the impenetrable for 30 years. This reissued collection includes features from times past, when Rolling Stone covered obscure British bands, gloomy discourses on Eighties American politics and Greil’s exasperation with Springsteen and Costello.”—The Times

“There isn’t a bland sentence or obligatory opinion in this book. Brittle, lyrical, funny, outraged and for all the untouched bases, remarkably whole, [In the Fascist Bathroom] has the feel of a vital fin de siècle document. It argues that the willful negations of punk have cleared the way for a reconstructed value system at the edge of the abyss. On the twin strengths of his intellectual rigor and moral fervor, Marcus muscles up to Armageddon.”—Matt Damsker, Rolling Stone

“Marcus, at his best, wrote and still writes about punk in a way that is as startling, as deceptively simple, and as moving as the music itself.”—Nick Pemberton, London Magazine

“Greil Marcus is the only writer I’d trust to explain what all that horrible screaming, vile spitting, and great punk music was really all about.”—Matt Groening

“[As with] Adorno, and before him Wittgenstein and Nietzsche, Marcus’s forte is the aphorism. This approach suits both his prose style-elegant, magisterial, economical-and his subject matter: rock is about the moments, specifically about fixing them in mind as they die, and Marcus was the first to say as much.”—Ann Marlowe, Village Voice

“His work develops history, as if it were a photo, in front of your very eyes. The essays are like the two-minute bursts of energy in so many of the songs he lauds; short and sharp, constantly stimulating, sometimes sad, more often elegiac, always endowed with the hope that humanitarian anger inspires.”—Gina Arnold, Metro (San Jose)