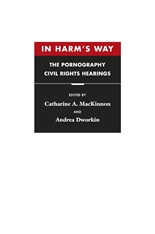 Edited by Catharine A. MacKinnon

“In Harm’s Way [is] essential reading. In the Eighties Professor Catharine MacKinnon and Andrea Dworkin drafted an anti-pornography civil rights law in support of which witnesses to the harm done by pornography were called at public hearings in Minneapolis (1983), Indianapolis (1984), Los Angeles (1985), and Boston (1992). Those horrified by the idea of any form of censorship may be shocked to learn that this is the first time the full texts (transcripts plus excellent introductions) have found a publisher in the United States.”—Bel Mooney, The Times

“Dworkin’s and MacKinnon’s work has informed debates about pornography and its effects all over the world. Though many…have disputed the wisdom of enacting legal proscriptions that may be invoked to suppress literature beyond the contemplation of their framers, the message underlying the campaign is powerful and far-reaching… The voices of the pornography survivors…make the most compelling—and the most distressing—reading… [This is] an important social document. We should be grateful for Dworkin’s and MacKinnon’s perseverance in bringing it to the light of day.”—The Times Higher Education Supplement

“Everyone who has ever taken sides in the debate about permissible limits to free speech in our society should read this book. It should be read by those who believe that freedom of speech should be absolute, as well as by those who yearn for more regulation of sexually explicit materials on the Internet, in books and magazines and on film… It is a fascinating collection of testimony on both sides of this issue. It is unlike other books on this debate since…it presents the facts as they stand and lets the reader decide.”—Bimonthly Review of Law Books

“[In Harm’s Way] brings the reader actual transcripts of hearings conducted relative to proposed ordinances in Minneapolis, Indianapolis, Los Angeles, and Massachusetts. MacKinnon wrote chapter one and Dworkin wrote chapter two to introduce the subject of pornography, its victims, and the history of public policy developments on the issue… In addition…MacKinnon…provide[s] elucidation and answer[s] arguments presented by opponents of the legislation [at other points in the text]… Dworkin presents a rather eloquent personal story of her life in a society that she believes routinely and systematically denies rights to women. In relating her story of living with a man who abused and terrorized her, she shares the misery of having unsuccessfully sought refuge and assistance from others… The authors are to be applauded for their evenhandedness in including not only the stories of the victims with whom they sympathize but also the comments of those who made serious arguments against the validity, legality, usefulness, and consequences of [their] proposals.”—Gloria C. Cox, Law and Politics Book Review

“Highly recommend[ed]… What makes [In Harm’s Way] both unique and important is that [it] give[s] voice to unpopular and stifled views. [It] defiantly call[s] for social chance and pose[s] difficult questions in a world addicted to instant gratification and slick PR campaigns… A must for anyone interested in the future of love, sex and gender relations.”—A. J. S., Media Watch

“There can be no doubt about the sincerity or the truth of the editors’ belief that the material in this book belongs in the public domain. In cooperating with legislators in attempting to bring it about that pornography’s dissemination be recognized as an actionable form of sex discrimination, MacKinnon and Dworkin’s assumption was not only that women have been harmed by pornography, but that they have been silenced by it: so long as pornographers benefit (materially) from their (alleged) right to free speech (alleged by advocates of First Amendment protection for pornography), women lose out from their inability to exercise the same right. The hearings, whatever their legal upshot, thus empowered women—by enabling them to give voice to the damage pornography had done them. Publication of the transcripts in book form constitutes a further defense of women’s rights.”—Jennifer Hornsby, Birkbeck College, University of London

“Here, in this book, is the source of the most powerful assault on patriarchy in modern jurisprudence. MacKinnon and Dworkin’s work is sometimes misunderstood as anti-sex. In fact, their theories and their practical work oppose the use, abuse, and dehumanization of women, and are built on the practice of listening to women, as these hearings conclusively reveal.”—Mari Matsuda, Georgetown Law School

“The feminist anti-pornography movement has been extraordinarily successful. Although none of the proposed laws that are the subject of this book are now on the books, the movement whose inception dates roughly to the beginnings of the Minneapolis hearings has been highly successful in changing the views of many people about the harms of pictorial materials embodying or endorsing sexual violence against women, and about the circumstances of the production of a substantial amount of highly sexually explicit material. It would be a mistake to underestimate from the lack of formal legal success the political, social, and cultural importance, and in many respects, success, of the feminist anti-pornography movement. This effect is not only American but worldwide, and the presence of active, and often successful, associated movements in Canada, New Zealand, Australia, South Africa, and many other countries is largely a product of the events whose formal documentation is the bulk of this book. This material is a valuable part of history.”—Frederick Schauer, John F. Kennedy School of Government at Harvard University

“In the words of real experience and personal testimony, In Harm’s Way shows that pornography is to females what Nazi literature is to Jews and Klan propaganda is to Blacks. Whether or not all such hate literature is protected by the First Amendment, all must be rejected if we are to live together with dignity and safety.”—Gloria Steinem

“These hearings provide the underpinnings for a legal initiative that has gotten enormous attention, that raises a host of important and interesting issues, and that has often been misunderstood. [It constitutes] an important addition for academics and for others to the pornography debate.”—Cass Sunstein, University of Chicago Law School

“These are the hearings that began it all: a conversation so heated and inspiring that the ideas are still forceful, still fought over, still evolving towards resolution.”—Patricia Williams, author of The Rooster’s Egg and The Alchemy of Race and Rights