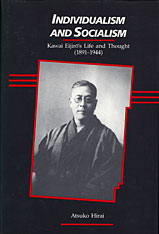 Kawai Eijirō was a controversial figure in Japan during the interwar years. Dedicated to the idea that the socialist aspiration for economic equality could be combined with a classical liberal commitment to individual political and civil rights, he antagonized both Marxists and Japanese nationalists. He was hounded by the government as a leftist and brought to trial during World War II.

This is the first study of Kawai in English. Atsuko Hirai examines the family and school influences that contributed to the development of Kawai’s thought, and analyzes the manner in which the ideas of such Western philosophers as Kant, Hegel, John Stuart Mill, Marx, T. H. Green, and the British labor ideologues were absorbed into a receptive and creative East Asian mind. The events of Kawai’s life are intertwined with the development of his idealist political philosophy, all culminating in a trial of unprecedented scale.