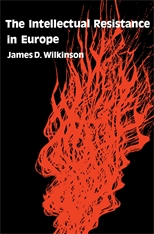 The Intellectual Resistance in Europe

Camus, Sartre, and Beauvoir in France. Eich, Richter, and Böll in Germany. Pavese, Levi, and Silone in Italy. These are among the defenders of human dignity whose lives and work are explored in this widely encompassing work. James D. Wilkinson examines for the first time the cultural impact of the anti-Fascist literary movements in Europe and the search of intellectuals for renewal—for social change through moral endeavor—during World War II and its immediate aftermath.

It was a period of hope, Wilkinson asserts, and not of despair as is so frequently assumed. Out of the shattering experience of war evolved the bracing experience of resistance and a reaffirmation of faith in reason. Wilkinson discovers a spiritual revolution taking place during these years of engagement and views the participants, the engagés, as heirs of the Enlightenment. Drawing on a wide range of published writing as well as interviews with many intellectuals who were active during the 1940s, Wilkinson explains in the fullest context ever attempted their shared opposition to tyranny during the war and their commitment to individual freedom and social justice afterward.

Wilkinson has written a cultural history for our time. His wise and subtle understanding of the long-range significance of the engages is a reminder that the reassertion of humanist values is as important as political activism by intellectuals.