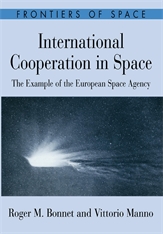 The Example of the European Space Agency

With the end of the Cold War, will the space race become a cooperative venture? This book, which tells the story of the European Space Agency, shows how such a cooperative enterprise has worked over the past three decades and how it might apply to future space science.

Linking fifteen European nations, the European Space Agency offers a working model of scientific, technological, and political cooperation on an international scale. Roger M. Bonnet and Vittorio Manno give us an insiders’ view of the agency—its beginnings as the European Space Research Organization, its development in the face of early difficulties, and its daily operations. Covering thirty years, this account traces the evolution of ESA’s programs, facilities, and capabilities and the establishment of its scientific, technological, industrial, and political policies and objectives. With an eye to future global space activities, the authors detail ESA’s relationships with its own member states and with other countries, particularly the United States. The history of cooperation between ESA and NASA as exemplified by two specific projects—Ulysses and the international space station—highlights the difficulties of associating different decision-making bodies and political systems.

Illustrated with pictures and diagrams, enlivened with anecdotes involving key world players in space science, this book provides a rich blend of factual information and personal recollection, history and interpretation. A timely contribution to the study of the politics of science and technology, it points the way to future international cooperation.