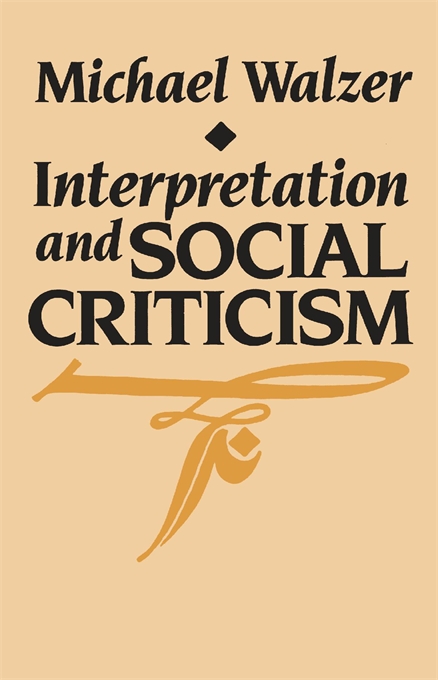 What do social critics do? I How do they go about doing it? Where do their principles come from? How do critics establish their distance from the people and institutions they criticize?

Michael Walzer addresses these problems in succinct and engaging fashion, providing a philosophical framework for understanding social criticism as a social practice. Walzer maintains that social criticism is an ordinary activity—less the offspring of scientific knowledge than the “educated cousin of common complaint”—and does not depend for its force or accuracy upon any sort of high theory. In his view, the social critic is not someone radically detached and disinterested, who looks at society as a total stranger and applies objective and universal principles. The true social critic must stand only a little to the side of his society—unlike Jean-Paul Sartre during the Algerian war, for example, who described himself as an enemy of his own people. And unlike Lenin, who judged Russian society against a standard worked out with reference to other places far away.

The “connected” critic is the model Walzer offers, one whose distance is measured in inches but who is highly critical nevertheless. John Locke is one example of the connected critic who argued for religious toleration not as a universal right ordained by reason but as a practical consequence of Protestant theology. The biblical prophets, such as Amos, were also men of their own day, with a particular quarrel to conduct with their fellows; the universalism of that quarrel is our own extrapolation. Walzer explains where critical principles come from, how much distance is “critical distance,” and what the historical practice of criticism has actually been like in the work of social philosophers such as Marx, Gramsci, Koestler, Lenin, Habermas, and Rawls.

Walzer posits a moral world already in existence, a historical product, that gives structure to our lives but whose ordinances are always uncertain and in need of scrutiny, argument, and commentary. The social critic need bring to his task only the ordinary tools of interpretation. Philosophers, political theorists, and all readers seriously interested in the possibility of a moral life will find sustenance and inspiration in this book.