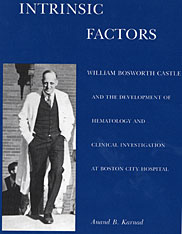 Dr. W. B. Castle (1897–1990), who played a major role in the emergence of hematology as a scientific discipline in the first half of this century, was instrumental in establishing the world-wide reputation of the Thorndike Memorial Laboratory and the Harvard Medical Unit at Boston City Hospital. In the first comprehensive biography of Castle, Anand Karnad highlights the golden age of medicine and hematology in Boston. Castle’s early experiments solved the puzzle of pernicious anemia and were the building blocks for a series of experiments on that disease that stand as one of the finest examples of clinical research ever conducted.

Castle and his group also made pioneering contributions to hemoglobin physiology, mechanisms of hemolysis, splenic function, and sickle cell anemia. Under his leadership, the Thorndike Memorial Laboratory attracted the best and the brightest talent, many of whom are present-day leaders in the world of medicine and science. Intrinsic Factors is the story of Castle’s life and work.