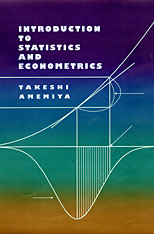 Introduction to Statistics and Econometrics

This outstanding text by a foremost econometrician combines instruction in probability and statistics with econometrics in a rigorous but relatively nontechnical manner. Unlike many statistics texts, it discusses regression analysis in depth. And unlike many econometrics texts, it offers a thorough treatment of statistics. Although its only mathematical requirement is multivariate calculus, it challenges the student to think deeply about basic concepts.

The coverage of probability and statistics includes best prediction and best linear prediction, the joint distribution of a continuous and discrete random variable, large sample theory, and the properties of the maximum likelihood estimator. Exercises at the end of each chapter reinforce the many illustrative examples and diagrams. Believing that students should acquire the habit of questioning conventional statistical techniques, Takeshi Amemiya discusses the problem of choosing estimators and compares various criteria for ranking them. He also evaluates classical hypothesis testing critically, giving the realistic case of testing a composite null against a composite alternative. He frequently adopts a Bayesian approach because it provides a useful pedagogical framework for discussing many fundamental issues in statistical inference.

Turning to regression, Amemiya presents the classical bivariate model in the conventional summation notation. He follows with a brief introduction to matrix analysis and multiple regression in matrix notation. Finally, he describes various generalizations of the classical regression model and certain other statistical models extensively used in econometrics and other applications in social science.