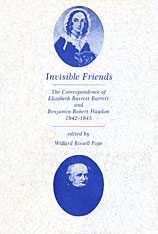 The Correspondence of Elizabeth Barrett Browning and Benjamin Robert Haydon, 1842-1845

Although Elizabeth Barrett Browning and Benjamin Robert Haydon never met, their lively and topical conversation, initiated in 1842, continued unabated until 1845, about a year before the painter’s suicide. It was a somewhat lopsided correspondence in which ninety-four letters written by Haydon, most of which have not been published before, received fewer replies from Miss Barrett, twenty-eight of which are included in this book. Judging from the contents of the letters, the epistolary friendship was truly meaningful to both. To Miss Barrett, Haydon was “my dear kind friend”; he was far more effusive, addressing her as “you Ingenious little darling invisible” and “my dearest dream & invisible intellectuality.”

In spite of Haydon’s frequent pleas for a meeting, Miss Barrett never agreed to receive him. However, as the correspondence progressed, they exchanged more and more confidences and each recognized the other as a responsive and sympathetic listener. With complete candor Haydon admitted at one point that egotism was the basis of his pleasure in the correspondence; “I never ask what you are doing,” he wrote, “but take it for granted what I am doing must be delightful to you.”

Evincing warmth and poignancy, the letters range over a variety of colorful subjects covering art, literature, current events, and gossip. The Elgin Marbles and Queen Victoria are discussed, and the correspondents air opposing views on mesmerism and Napoleon versus Wellington. After a thoughtful introduction which provides background information on Miss Barrett and Haydon, Willard Pope presents the letters—carefully annotated with identifying information on people, places, and current events—in chronological order.