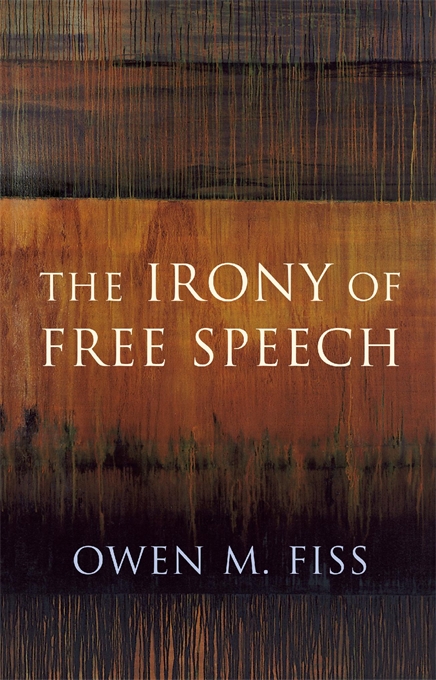 The Irony of Free Speech

“In this slim but provocative volume, Yale law professor Owen Fiss addresses an impressively wide range of free speech issues, from hate literature and pornography through campaign financing, public funding of the arts and regulating the media. It is essential reading for anyone dissatisfied with the civil libertarian rhetoric…and who seeks a more balanced liberalism in which the demands of equality are heard alongside those of liberty.”—Wayne Sumner, The Globe and Mail

“If managing to infuriate people across a wide range of the political spectrum is a reliable measure of an essay’s value, then Owen Fiss’ succinct and lucid new argument, The Irony of Free Speech, may well come to be considered epically successful… Fiss, a Yale law professor, is that odd dinosaur: an old-line liberal who has thought matters through carefully and at length, and who acknowledges his own value judgments.”—Paul Reidinger, ABA Journal

“[A] sophisticated confection… Fiss, Yale Law School’s Sterling Professor of Law, is a serious and learned academic, attuned to the myriad nuances of constitutional law… [He] declares that the First Amendment can be viewed not only as a protector of the individual interest in self-expression (the so-called libertarian theory of speech), but also as a protector of popular sovereignty and a force to broaden the scope of public discussion (the democratic theory of speech)… [Fiss’s] intellect is stamped on every sentence in The Irony of Free Speech, which is destined, I’m sure, to become the fodder for a thousand law review articles.”—Joel Chineson, The American Lawyer

“Fiss makes many good points and stimulates thought on an increasingly important subject. The Irony of Free Speech is well worth the few hours that a careful reading requires.”—Robert Hauptman, Journal of Information Ethics

“[A] fine achievement. In addition to the virtues of brevity and conciseness, The Irony of Free Speech contains the much rarer merit of original thought on fundamental issues. Fiss undertakes that most difficult of tasks: to try to get us to think in a new way about old and familiar issues, and he does so with a clarity and precision, style and grace, that is both stimulating and impressive… On finishing The Irony of Free Speech, one knows that he or she has read something of genuine value and has had a real intellectual experience. Fiss’s ideas stay in the mind, bouncing around, dislodging other previously held notions… [It] achieves all that a book can hope to achieve.”—Daniel J. Kornstein, New York Law Journal

“Fiss contends that government plays a valuable role in maintaining public debate, and he makes several convincing arguments against the many legislators and advocates from across the political spectrum who strongly disagree with that simple postulate… Bolstering himself with a plethora of federal court precedents and solid legal scholarship, Fiss speaks volumes in fewer than 100 pages.”—Booklist

“A slim volume offering large arguments for an activist government that protects and also promotes free speech… Fiss demonstrates how three specific issues—hate speech, pornography, and campaign finance—can be examined productively if it is assumed that the government has a positive, proactive responsibility derived from both the First and Fourteenth amendments to ‘promote free and open debate.’ Fiss argues brilliantly and concisely for ‘an improved sense of proportion.’ The state, he admits, ‘can do terrible things to undermine democracy,’ but it can do ‘some wonderful things to enhance it as well.’ Arguing cogently for an enhanced ‘robustness of public debate,’ The Irony of Free Speech makes its own very robust contribution to that debate.”—Kirkus Reviews

“A beautifully written work that is crammed full of provocative but disciplined thought. Like all of Fiss’s writing, it combines moral commitment with a painstaking construction of reasoned arguments. It will make many angry, but I believe that the anger will be productive. The Irony of Free Speech will engender abundant discussion. Its limpidity, its flawless unfolding, its calmness of tone, its strength of mind, all conduce to making the book so impressive as to compel attention. A bracing, intellectual experience.”—George Kateb, Princeton University

“Fiss is one of the truly magisterial figures in contemporary American legal academics. He commands nearly universal respect for the depth and lucidity of his intellect, for the integrity and passion of his character, and for the breadth and purity of his scholarship.”—Robert Post, University of California, Berkeley, School of Law