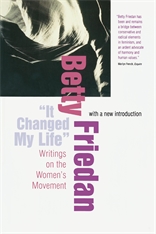 “It Changed My Life”

Writings on the Women’s Movement, With a New Introduction

“It changed my life.” That’s what Betty Friedan heard over and over from women throughout the United States after the publication of her radical best-seller, The Feminine Mystique, sparked the beginning of contemporary feminism. The first stirring and uncertain years of the women’s movement helped many women put a name to the sense of invisibility, powerlessness, and depression that Friedan famously called “the problem that has no name.”

First published in 1976, “It Changed My Life” is a compellingly readable collection of reports from the front, back in the days less than a generation ago when women were routinely shut out of the professions and higher education, underpaid, condescended to, and harassed without consequences to the harassers. The book describes the political campaigns for equal pay and job opportunities, for the outlawing of sex discrimination, for the Equal Rights Amendment, and for legalized abortion, the creation of National Organization for Women, the National Abortion Rights Action League, and the National Women’s Political Caucus, and analyzes the antifeminist backlashes. Encounters with Simone de Beauvoir and Indira Gandhi are juxtaposed with moving and vivid personal struggles of many ordinary women. Among those women was Friedan herself, who frankly recorded her astonishment, gratification, and anger as the movement she helped create grew beyond all her hopes, and then raced beyond her control into a sexual politics she found disturbing.

A classic of modern feminism, “It Changed My Life” brings back years of struggle for those who were there, and recreates the past for the readers of today who were not yet born during these struggles for the opportunities and respect to which women can now feel entitled. In changing women’s lives, the women’s movement has changed everything.