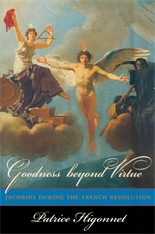 Jacobins during the French Revolution

Who were the Jacobins and what are Jacobinism’s implications for today? In a book based on national and local studies—on Marseilles, Nîmes, Lyons, and Paris—one of the leading scholars of the Revolution reconceptualizes Jacobin politics and philosophy and rescues them from recent postmodernist condescension.

Patrice Higonnet documents and analyzes the radical thought and actions of leading Jacobins and their followers. He shows Jacobinism’s variety and flexibility, as it emerged in the lived practices of exceptional and ordinary people in varied historical situations. He demonstrates that these proponents of individuality and individual freedom were also members of dense social networks who were driven by an overriding sense of the public good. By considering the most retrograde and the most admirable features of Jacobinism, Higonnet balances revisionist interest in ideology with a social historical emphasis on institutional change. In these pages the Terror becomes a singular tragedy rather than the whole of Jacobinism, which retains value today as an influential variety of modern politics. Higonnet argues that with the recent collapse of socialism and the general political malaise in Western democracies, Jacobinism has regained stature as a model for contemporary democrats, as well as a sober lesson on the limits of radical social legislation.