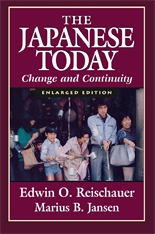 Japan, like the rest of the world, has undergone enormous changes in the last few years. The impact of the end of the Cold War has combined with a worldwide recession to create a fluid situation in which long-held assumptions about politics and policies no longer hold. A classic, short history of Japan, this book has been brought up-to-date by Marius Jansen, now our most distinguished interpreter of Japanese history. Jansen gives a lucid account and analysis of the events that have rocked Japan since 1990, taking the story through the election of Murayama as prime minister.

About the previous edition:

With the two-thousand-year history of the Japanese experience as his foundation, Edwin O. Reischauer brings us an incomparable description of Japan today in all its complexity and uniqueness, both material and spiritual. His description and analysis present us with the paradox that is present-day Japan: thoroughly international, depending for its livelihood almost entirely on foreign trade, its products coveted everywhere—yet not entirely liked or trusted, still feared for its past military adventurism and for its current economic aggressiveness.

Reischauer begins with the rich heritage of the island nation, identifying incidents and trends that have significantly affected Japan’s modern development. Much of the geographic and historical material on Japan’s earlier years is drawn from his renowned study The Japanese, but the present book deepens and broadens that earlier interpretation: our knowledge of Japan has increased enormously in the intervening decade and our attitudes have become more ambivalent, while Japan too has changed, often not so subtly.

Moving to contemporary Japanese society, Reischauer explores both the constants in Japanese life and the aspects that are rapidly changing. In the section on government and politics he gives pithy descriptions of the formal workings of the various organs of government and the decision-making process, as well as the most contentious issues in Japanese life—pollution, nuclear power, organized labor—and the elusive matter of political style.

In what will become classic statements on business management and organization, Reischauer sketches the early background of trade and commerce in Japan, contrasts the struggling prewar economy with today’s assertive manufacturing, and brilliantly characterizes the remarkable postwar economic miracle of Japanese heavy industry, consumer product development, and money management. In a final section, “Japan and the World,” he attempts to explain to skeptical Westerners that country’s growing and painful dilemma between neutrality and alignment, between trade imbalance and “fair” practices, and the ever-vexing issue of that embodiment of Japanese specialness, a unique and difficult language that affects personal and national behavior.