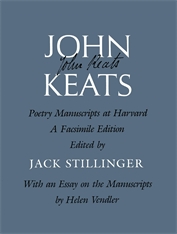 After more than a century of study, we know more about John Keats than we do about most writers of the past, but we still cannot frilly grasp the magical processes by which he created some of the most celebrated poems in all of English literature. This volume, containing 140 photographs of Keats’s own manuscripts, offers the most concrete evidence we have of the way in which his thoughts and feelings were transmuted into art.

The rough first drafts in particular are frill of information about what occurred, if not in Keats’s mind, at least on paper when he had pen in hand: the headlong rush of ideas coming so fast that he had no time to punctuate or even form the letters of his words; the stumbling places where he had to begin again several times before the words resumed their flow; the efforts to integrate story, character, and theme with the formal requirements of rhyme and meter. Each revision teaches the inquiring reader something about Keats’s poetic practice.

Several of the manuscripts are unique authoritative sources, while others constitute our best texts among multiple existing versions. They reveal much about the maturation of the poet’s creativity during four years of his brief life, between “On Receiving a Curious Shell” (1815) and “To Autumn” (1819). Above all, they show us what is lost when penmanship yields to the printed page: what Helen Vendler, in her insightfiul essay on the manuscripts, calls “the living hand of Keats.” These sharply reproduced facsimiles provide compelling visual evidence of a mortal author in the act of composing immortal works.