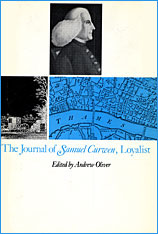 The Journal of Samuel Curwen, Loyalist

“He was a man of fair learning, and more than average accomplishment; not at all intolerant of opinions at issue with his own; in religion a Dissenter of the class still prevalent in New England: in his tastes scholarly and refined, not ill read in general literature, prone to social enjoyments, a reasonably good critic of what he saw, altogether an excellent example of the class of men out of whom the fathers and founders of that great republic sprang…”—Charles Dickens, in summing up the character of Samuel Curwen

This unabridged two-volume edition of Samuel Curwen’s journal supersedes the only version previously available to historians: a fragmentary and inaccurate mid-nineteenth-century work published by George Atkinson Ward, which nevertheless was celebrated by Charles Dickens.

Andrew Oliver, combining painstaking documentation with an abundance of illustrations, provides a colorful, complete work which ranks as a valuable source of English social history from 1775 to 1784. It was during these years that Curwen, a Salem merchant, after fleeing from the harassment incurred by his loyalist activities, migrated to England and kept this journal. A man small in size, physically timid, mentally brave, and remarkably injudicious, Curwen felt that he was “unhappily though unjustly ranked” as a Tory. Thus his observations and thoughts are useful in understanding the attitudes and experiences of the loyalist exiles.

Set primarily in England and sparked throughout with engaging reports on personalities, places, and even the weather, the journal traces Curwen’s nine years of exile. It also briefly details his departure from Salem, his short and alarming sojourn in Philadelphia where he found the political climate no less unfavorable, and his subsequent sea voyage to England.

The Journal of Samuel Curwen, Loyalist is the first in a series of Loyalist Papers, a long-term program to be undertaken independently by a number of publishers in Britain, Canada, and the United States. The program will locate, gather, and make available documents that place in perspective those Americans who, at the time of the Revolution, remained loyal to the Crown.