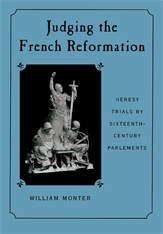 This original look at the French Reformation pits immovable object—the French appellate courts or parlements—against irresistible force—the most dynamic forms of the Protestant Reformation. Without the slightest hesitation, the high courts of Renaissance France opposed these religious innovators. By 1540, the French monarchy had largely removed the prosecution of heresy from ecclesiastical courts and handed it to the parlements. Heresy trials and executions escalated dramatically. But within twenty years, the irresistible force had overcome the immovable object: the prosecution of Protestant heresy, by then unworkable, was abandoned by French appellate courts.

Until now no one has investigated systematically the judicial history of the French Reformation. William Monter has examined the myriad encounters between Protestants and judges in French parlements, extracting information from abundant but unindexed registers of official criminal decisions both in Paris and in provincial capitals, and identifying more than 425 prisoners condemned to death for heresy by French courts between 1523 and 1560. He notes the ways in which Protestants resisted the French judicial system even before the religious wars, and sets their story within the context of heresy prosecutions elsewhere in Reformation Europe, and within the long-term history of French criminal justice.