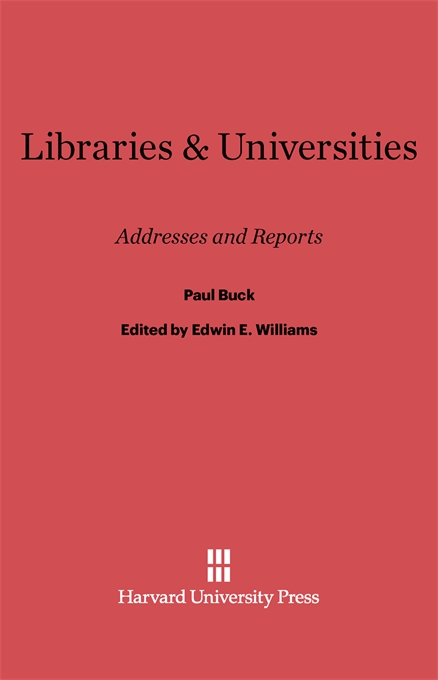 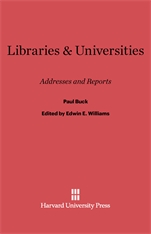 Perhaps the most exciting aspect of the Harvard University Library today is that in this largest university library in the world primary emphasis is placed upon a regard for the individual which extends alike to staff, faculty, students, and general users. As director of the Library, Paul Buck was responsible for this attitude. This book reflects his view that as the center of university education and research a library owes a responsibility both to the people who use libraries and to those who operate them. Personal consideration must be united with the mechanization and automation that is essential in developing a modern library’s collections, circulation, and special services.

Here are addresses, articles, and reports in which Mr. Buck interprets the Harvard Library to its own staff, to the academic community, and to the general public. For the general reader who wants to know something of the nature and significance of university libraries, the author presents a historical view as well as an interesting picture of what the largest library of its kind is doing today.

The collection begins with a talk given at Monticello in 1954 in which Mr. Buck announced his university library credo, emphasizing the importance of the university library, its personnel, and its services to the community. This credo he restates at the end of this volume. Throughout the book are speeches bearing on the author’s conception of libraries for teaching and research as well as a description of the administrative program at Harvard that he based on this conception.

He analyzes problems involved in recruiting, training, and retaining a quality staff of professional librarians. In one article he deals with the new personnel program adopted by the Harvard Library in 1958. In another he is concerned with the remarkably successful plan for recruiting “library interns” that is now in operation at Harvard. Still another paper discusses a landmark of his administration, the installation of a mechanized circulation system.

Included here also are addresses reflecting Mr. Buck’s broad historical perspective. He deals with the long-range future of libraries generally and with the prospects of American universities. He is concerned with relations between historians, librarians, and businessmen. In a short paper he touches on another landmark of his administration—the first steps taken in planning the John F. Kennedy library.