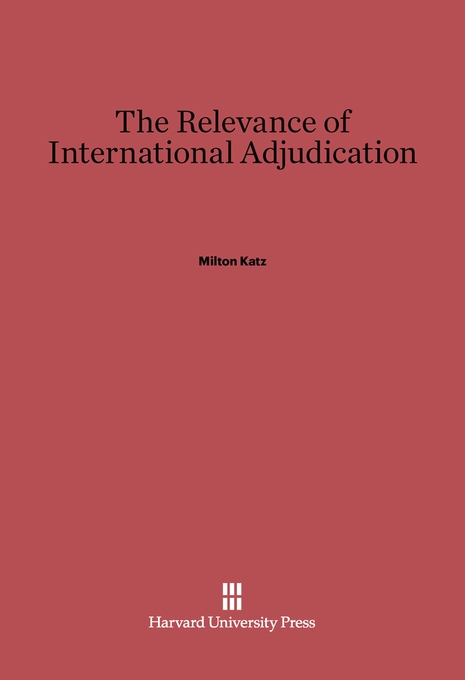 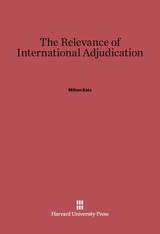 The Relevance of International Adjudication

It has been an ancient and tenacious human hope that mankind could apply to the no man’s land between states the experience of domestic law in curbing violence and settling disputes. Within a society, the use of law to resolve disputes and contain violence centers in the courts and the police. Men anxious to restrain international aggression and settle international disputes peaceably have long sought to invoke international policing and adjudication under law. Twice within the past half-century, they have undertaken to build worldwide organizations to keep the peace. The United Nations system assigns a critical role to adjudication under the Charter and international law.

In this book, one of America’s foremost legal scholars, who has extensive experience in foreign policy, administration, and international law, explores whether and to what extent decisions by international tribunals have been significant, or may yet be significant, for the settlement of international disputes. Milton Katz believes that adjudication as an institution ranks among the great creative achievements of mankind, but it has its limitations—limits both in current practice and in its potential scope.

In presenting his argument, Mr. Katz concentrates upon the period since the end of World War II and deals primarily with international conflict within the experience of the United Nations and the International Court of Justice. He focuses on disputes resulting from the Cold War and on those between established industrial states and newly emerging states or peoples that have not yet attained a full measure of self-government.

In examining what happened and appraising what might have happened; Mr. Katz keeps the reader constantly aware of the many meanings of law; and of the need to sort out the different meanings in order to apply law effectively. Without an understanding of the effective reach and the limits of adjudication; he insists; we will waste opportunities for settling international controversies. We can waste opportunities by failing to use international tribunals where they can be effective; we can dissipate the precious resource of adjudication in wishful misapplications; and in misapplying adjudication; we can divert our attention from other ways and means more pertinent to the settlement of particular international disputes.