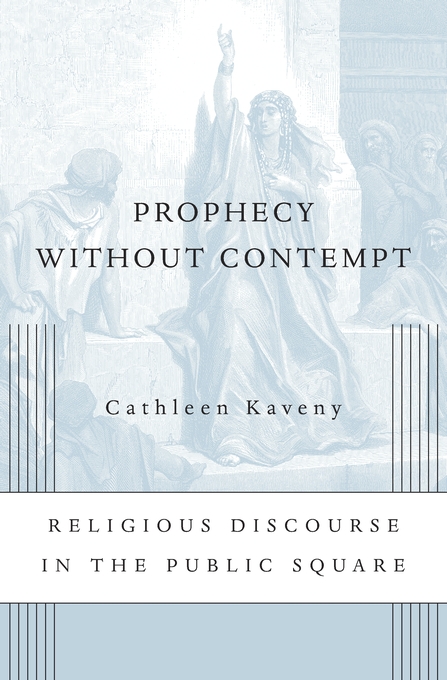 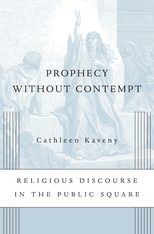 “Inspiring… [Kaveny] suggests that religion’s most powerful public role involves ‘prophetic indictment’ of our shortcomings. Martin Luther King Jr. is one model of this, Abraham Lincoln another. She insists that the most powerful prophets are tempered by ‘a lively sense of humility.’ They understand both the limits of their knowledge and their own moral shortcomings. They also have ‘social humility regarding the status of other peoples, including one’s enemies, in God’s affections.’ In other words, they don’t consign their foes to hell.”—E. J. Dionne, Jr., The Washington Post

“Kaveny’s project in Prophecy without Contempt is important and path-breaking. The place of religious discourse in the American public square has received much attention for many years, but the role of prophetic indictment has been largely overlooked. Kaveny’s book not only opens a ‘new front’ in these debates, but starts the conversation with a rich analysis of the history and function of prophetic discourse and a carefully developed normative framework to guide its use. The interdisciplinary work that informs Kaveny’s book is especially impressive. As an ethicist and legal academic, Kaveny draws on resources from these disciplines, and she also integrates sophisticated analyses of American history, biblical scholarship, and literary criticism.”—Kathleen A. Brady, Commonweal

“[An] original account of public speech in America’s past, present, and possible future… The timely genius of Prophecy Without Contempt lies in its examination of the rhetoric of contemporary moral and political debates in light of this tradition of the American jeremiad, which she sees running through the American Revolution and Civil War into the present. Although Kaveny deliberately ends her study with the presidential election of 2004, when speeches were pitched to attract the ‘moral voter,’ she offers an essential perspective on the 2016 primaries.”—William Storrar, Commonweal

“A monumental achievement, and a much-needed addition to the academic and societal conversation about the role of religion in public life. In precise prose and with careful analysis, Kaveny challenges some of the leading theorists about public discourse and puts forward her own theories, all accompanied by a storyteller’s gift for anecdote and a philosopher’s talent for explication.”—Michael Sean Winters, National Catholic Reporter

“This is a well-imagined, highly detailed, multidisciplinary, compelling, and clearly written analysis of the history (from biblical, to American Puritan, to contemporary U.S.) of the conceptual roots, religious and cultural nature, and contributions to civil (or uncivil) political discourse of the ‘American Jeremiad’ or prophetic indictment.”—L. S. Hulett, Choice

“Cathleen Kaveny has given us a book that brings us closer to both the rhetoric and the reality of American politics. In our history, commitment is not incompatible with civility, and Prophecy without Contempt shows how we might recover that possibility for the future.”—Robin Lovin, Southern Methodist University

“Through solid historical insights and careful moral reasoning, Kaveny gives her readers something that has become increasingly rare: a strong religious voice that points not to a shouted dialogue of the deaf, but to integrity, community, healing, and ways of getting along. It is an important book for the times.”—Mark Noll, University of Notre Dame

“What a welcome book! Kaveny shows us a reality hidden in plain sight, the rhetorical form of the jeremiad, which is crucial for understanding how and why political discourse has become so sour and polarized. Her wonderfully fresh and important approach deserves to be pondered by all who hope to understand the public square today.”—John O’Malley, Georgetown University