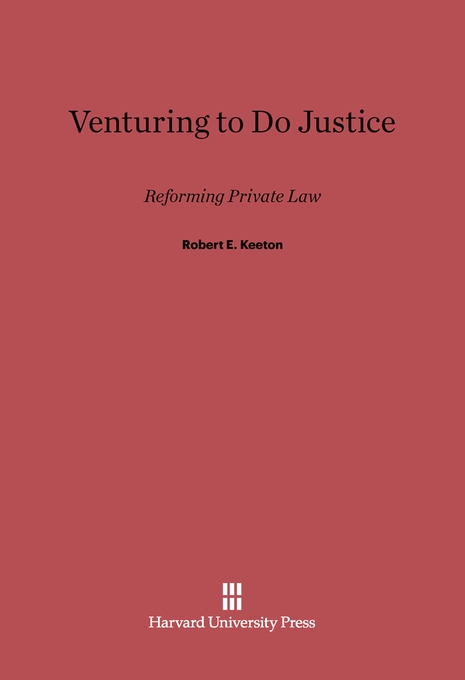 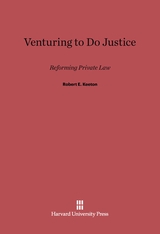 Venturing to Do Justice

Since 1958 state courts of last resort in the United States have handed down a notably larger number of overruling decisions than ever before. This distinctive record raises many questions about how and by whom law reform should be effected. Robert E. Keeton examines this issue in relation to private law the branch of law concerned with the rights and duties of private individuals toward each other, enforceable through civil proceedings.

In the first part of this book, the author reviews methods of law reform. He focuses on the role of the courts and legislatures as agencies of abrupt change; the remarkable rate at which the role of the courts has grown; and the means by which courts may discharge their increased responsibility for changing private law to meet contemporary needs. He strongly urges a more active and imaginative participation in law reform by both courts and legislatures, and proposes concrete methods for achieving it.

In the second part of this book, Mr. Keeton concentrates on reform in two important areas of private law: harms caused by defective products and by traffic accidents. He considers the developing rules for strict liability, and discusses the issues of principle underlying the basic protection plan for traffic victims—a proposal, of which he is co-author, which is under consideration in a number of state legislatures.

The closing chapter treats problems stemming from the necessity of blending the old with the new when private law reform is undertaken. This discussion stresses one of the book’s recurring themes: the need to balance stability and predictability of law with flexibility and reform.

The author disposes of some misconceptions about the role of public policy in a workable legal system—misconceptions that sometimes affect the attitudes and thinking not only of professionals in the field of law, but also of those who see the system from the outside.

This book contains controversial ideas that will be of interest to all who are concerned with law reform, whether professionally or as informed citizens.