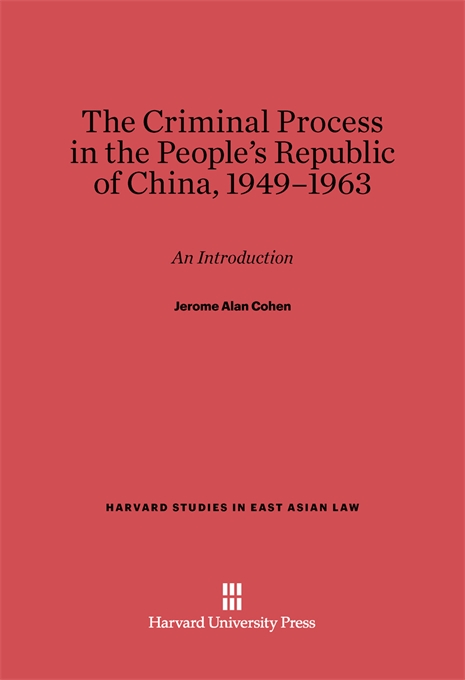 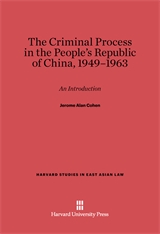 This volume represents the fruits of a preliminary inquiry into one aspect of contemporary Chinese law-the criminal process. Investigating what he calls China’s “legal experiment,” Jerome Alan Cohen raises large questions about Chinese law. Is the Peoples Republic a lawless power, arbitrarily disrupting the lives of its people? Has it sought to attain Marx’s vision of the ultimate withering away of the state and the law? Has Mao Zedong preferred Soviet practice to Marxist preaching? If so, has he followed Stalin or Stalin’s heirs? To what extent has it been possible to transplant a foreign legal system into the world’s oldest legal tradition? Has the system changed since 1949? What has been the direction of that change, and what are the prospects for the future?

Today, immense difficulties impede the study of any aspect of China’s legal system. Most foreign scholars are forbidden to enter the country, and those who do visit China find solid data hard to come by. Much of the body of law is unpublished and available only to officialdom, and what is publicly available offers an incomplete, idealized, or outdated version of Chinese legal processes. Moreover, popular publications and legal journals that told much about the regime’s first decade have become increasingly scarce and uninformative.

In order to obtain information for this study, Cohen spent 1963-64 in Hong Kong, interviewing refugees from the mainland and searching out and translating material on Chinese criminal law. From the interviews and published works, he has endeavored to piece together relevant data in order to see the system as a whole.

The first of the three parts of the book is an introductory essay, providing an overview of the evolution and operation of the criminal process from 1949 through 1963. The second part, constituting the bulk of the book, systematically presents primary source material, including excerpts from legal documents, policy statements, and articles in Chinese periodicals. In order to show the law in action as well as the law on the books, the author has included selections from written and oral accounts by persons who have lived in or visited the People’s Republic. Interspersed among these diverse materials are Mr.