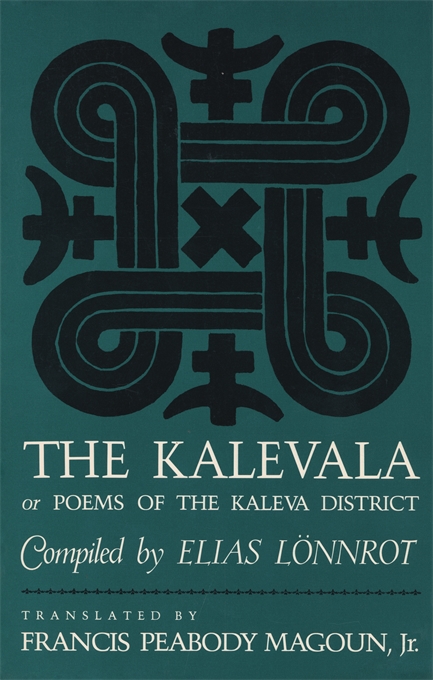 Or, Poems of the Kaleva District

“Thanks to a…clear, accurate version by Francis Magoun, Kalevala is accessible to interested readers everywhere… The kaleidoscopic Kalevala opens with the creation of the world and the birth of the ancient hero, Väinämöinen, a being of supernatural origins. The work then turns to the relations between two communities: Kalevala (‘Land of the Kaleva’—the poetic name for Finland), led by Väinämöinen, and Pohjola (‘Land of the North’), ruled by Louhi, and old woman who can change into an avenging dragon… This…version, expertly…translated by Francis Magoun and recently issued by Harvard University Press, is probably the best translation readily available in English today.”—Donald V. Mehus and Thomas J. Martin, Western Viking

“Into the shifting of tone from lyrically tragic poems to those about warfare, from wedding lays to sheer horseplay, Magoun has infused the unmistakable speech rhythm and diction of our own language… The Kalevala is a monumental work.”—John Godfrey, The Christian Science Monitor

“The original sense [of the Kalevala] breaks through in a refreshing new way… The philologist and folklorist will welcome the new precision of thought and expression. For English students of Kalevala…this is an indispensable book… Dr. Magoun’s re-appraisal of this museum piece from Finland brushes off some of the dust and helps us to see anew something of its originality and distinction.”—W. R. Mead, Folklore

“This authoritative new translation of the Kalevala, together with the materials the volume contains relating the poetic style of the Finnish songs to the style of other orally composed poetry, is especially significant to students of European folklore… Both Professor Magoun and the Harvard University Press have placed many generations of folklorists in their debt.”—Robert Kellogg, Journal of American Folklore

“What distinguishes this work from other Kalevala translations is the fact that Professor Magoun presents a prose translation of the national folk epic of Finland, a translation which is accurate and scholarly in every detail… The translator makes his translation agree line for line with the original; the result is that this translation makes readily apparent the parallelisms, the poetic images, and the wry humor as well as the homely realism of the Finnish original.”—The Scandinavian-American Bulletin