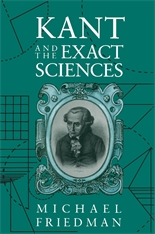 Kant and the Exact Sciences

Kant sought throughout his life to provide a philosophy adequate to the sciences of his time—especially Euclidean geometry and Newtonian physics. In this new book, Michael Friedman argues that Kant’s continuing efforts to find a metaphysics that could provide a foundation for the sciences is of the utmost importance in understanding the development of his philosophical thought from its earliest beginnings in the thesis of 1747, through the Critique of Pure Reason, to his last unpublished writings in the Opus postumum.

Previous commentators on Kant have typically minimized these efforts because the sciences in question have since been outmoded. Friedman argues that, on the contrary, Kant’s philosophy is shaped by extraordinarily deep insight into the foundations of the exact sciences as he found them, and that this represents one of the greatest strengths of his philosophy. Friedman examines Kant’s engagement with geometry, arithmetic and algebra, the foundations of mechanics, and the law of gravitation in Part One. He then devotes Part Two to the Opus postumum, showing how Kant’s need to come to terms with developments in the physics of heat and in chemistry formed a primary motive for his projected Transition from the Metaphysical Foundations of Natural Science to Physics.

Kant and the Exact Sciences is a book of high scholarly achievement, argued with impressive power. It represents a great advance in our understanding of Kant’s philosophy of science.