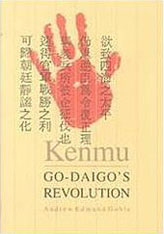 The short-lived Kenmu regime (1333–1336) of Japanese Emperor Go-Daigo is often seen as an inevitably doomed, revanchist attempt to shore up the old aristocratic order. But far from resisting change, Andrew Edmund Goble here forcefully argues, the flamboyant Go-Daigo and his iconoclastic associates were among the competitors seeking to overcome the old order and renegotiate its structure and ethos. Their ultimate defeat did not automatically spell failure; rather, the revolutionary nature of their enterprise decisively moved Japan into its medieval age.

By birth, education, and circumstances, Go-Daigo should have been a weak, fatalistic bit player. Instead this student of Chinese political theory was a bold actor with an unprecedented knowledge of the various regions of Japan, who forced situations to his own benefit and led a rebellion that overthrew the Kamakura bakufu. Kenmu: Go-Daigo’s Revolution tells his extraordinary personal story vividly, reexamines original sources to discover the real nature of the Kenmu polity, and sets both within the broader backdrop of social, economic, and intellectual change at a dynamic moment in Japanese history.