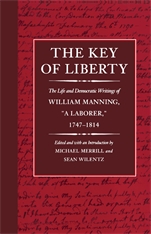 The Key of Liberty

The recovery of the ideas and experiences of William Manning is a major event in the history of the American Revolutionary era. A farmer, foot soldier, and political philosopher, Manning was a powerful democratic voice of the common American in a turbulent age. The public crises of the infant republic—beginning with the Battle of Concord—shaped his thinking, and his writings reveal a sinewy mind grappling with some of the weightiest issues of the nation’s founding. His most notable contribution was the first known plan for a national political association of laboring men. That plan, and Manning’s broader conclusions, open up a new vista on the popular origins of American democracy and the invention of American politics.

Until now, only a few specialists have referred to any of Manning’s writings—though always with some wonderment at his sophistication—and his place as a pioneering and exemplary American democrat has been largely unacknowledged. In this new and complete presentation of his works, the often arid debates over “republicanism” and “liberalism” in early America come to life in vivid human detail. The early growth of democratic impulses among quite ordinary people—impulses that defy orthodox categories, yet come closer to describing the ferment that led to the repeated political conflicts of the late eighteenth century—is here visible and felt. The Key of Liberty allows us a fuller understanding of the popular responses to the major political battles of the early republic, from Shays’ Rebellion through the election of Thomas Jefferson. It offers, better than any book yet published, a grassroots view of the rise of democratic opposition in the new nation. It sheds considerable light on the popular culture—literary, religious, and profane—of the epoch, with more exactness than previous histories, presenting a new interpretation of early American democracy that is bound to be controversial and much discussed.

The editors have written a lengthy and detailed introduction placing Manning and his writings in broad context. They have also modernized the text for easy use and have included full annotation, making this volume an authoritative contribution to the American Revolution and its aftermath.