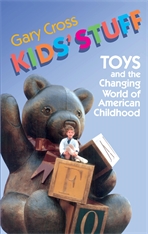 Toys and the Changing World of American Childhood

“[Gary Cross] has read every trade journal, toy press release, Erector set ad and obscure article from or on American toy history. In this indispensable book, his is a kind of tunnel-vision scholarship at the end of which, rare in our times, there is actually illumination… If the once modest toy is beginning to be displaced from its previously immodest spot in the child’s heart, this history of toys should gain a place in adult consciousness. It, too, is a tool, directing us toward a new-style education in what’s important in our particular age of confusion presided over by the entertainment conglomerate, that voice of modern authority. With the help of Gary Cross, we can now take a long look at history and give some thought to how to deal with our children’s new transnational babysitters.”—Tom Engelhardt, The Nation

“[A] fascinating new study of American toys… Mr. Cross not only gives the reader a succinct history of toys in America, but also examines the reasons for the sea change that has taken place in the toy industry in recent years. He looks at changing notions of childhood and disparate theories of play, and he assesses the declining popularity of the educational toy as a means of developing a child’s creativity and skills… He has not written a polemic or diatribe, but an intelligently informed analysis that reveals a lot about how our attitudes toward children, and children’s attitudes toward the world, have evolved over the last century.”—Michiko Kakutani, The New York Times

“Gary Cross, in his book on the history of American toys, notes that for a century or so, manufactured American toys—dolls, trains, soldiers, board games—encouraged children to fantasize about joining the adult world. In that way, they were Bruegelesque. Childhood may have been seen as a privileged time, but there was still a fundamental message: someday all this was to be left behind, as Winnie-the-Pooh was when Christopher Robin went off to school… More recently, Mr. Cross argues, the game has changed. Contemporary toys, particularly for boys, including figures like the Teenage Mutant Ninja Turtles and Power Rangers and video games like Virtual Fighter and Quake, encourage a fantasy world independent of adult influence and adult rationality, a world with its own languages, rules and culture. Adults are irrelevant as either players or models.”—Edward Rothstein, The New York Times

“No parent of a Teletubby fan would disagree with the argument of Gary Cross’s Kids’ Stuff…that toy makers no longer sell to parents, but to children, and that television is their most powerful marketing tool. As Mr. Cross shows in his enjoyable history, the origins of this trend are old.”—The Economist

“Kids’ Stuff provides a fascinating, nuanced view of the relationship between kids, parents and toys… As Cross makes clear, the story of toys is the story of parenting, of the way we view our children and the kind of adults we hope they will become.”—Elizabeth Austin, The Chicago Tribune

“[An] engrossing history of toys in America… Cross brilliantly explains how toys and play built around pure fantasy help today’s children cope with a world more full of questions than answers.”—Georgia Jones-Davis, Newsday

“Kids’ Stuff gives a detailed and fascinating analysis of the conceptual, emotional, and commercial developments that have brought us to the point where the purchase, not the product (let alone the giver or receiver) is the focus of social interest… Cross’s message is evaluative and realistic.”—Julia Thorogood, The Times Educational Supplement

“Gary Cross observes that as more toys are derived from cartoons and other media—which can limit kids’ play to scenarios that someone else has dreamed up—children’s rooms are turning into shrines to fast-food giveaways and movie tie-ins.”—Ron Taffel, Parents

“As Gary Cross shows in this thoughtful and well written study, toys give us some revealing answers to important questions… He finds some fascinating lessons by tracing the origins of the contemporary feeding frenzy among youthful customers… Clearly and entertainingly written, Cross’s book is always enlightening, sometimes disturbing, and often—there’s no other word for it—fun.”—Elliott West, American Studies

“Some books just beg to be read. Gary Cross’s Kids’ Stuff is one of those books. With its blue cover and colorful Romper Room lettering, featuring an enormous FAO Schwarz bear, the book demands the reader’s attention. Fortunately, the book delivers nearly all that the cover promises, providing readers a fascinating glimpse at the past hundred years of the American toy industry… Kids’ Stuff is a marvelous read. It is a fascinating topic, presented in a readable, enjoyable manner. The author has done an excellent job of researching how all sorts of adults have attempted to mold the wants and desires of American children. The book will find a niche in the classrooms of those teaching the history of the family, popular culture, and even American history surveys that incorporate the history of childhood. Equally, the ‘average’ reader, simply wanting a stimulating book, or a journey back into his or her own childhood, will find Kids’ Stuff well worth the effort.”—Pamela Riney-Kehrberg, Annals of Iowa

“Kids’ Stuff is a good read not only because it reminds adults of their childhood, helps explain homes full of toys, or contains some wonderful pictures, but also because it throws light on the connections between culture and business. This is not business history, but it should be read by business historians.”—Margaret Walsh, Business History

“Cross has a good, readable style that would make the book accessible to those who haven’t thought much about the topic before. Face it, what isn’t there about toys to capture the interest?… Cross mingles social history with economic history, as he tells us about the toy manufacturers, the strategies used to market their products, the consumer market, and the changing toys themselves. Changes in family life and its idealization, in the ways we celebrate holidays (managed by marketing firms), in discretionary spending and consumption patterns, in educational philosophies, as well as in production technologies shaped the American market for toys. Throughout, Cross is sensitive to issues of class, gender, and race… I recommend this book to anyone interested in socialization, childhood, children and family life, or toys. Usable in your undergraduate classes, it may also supply the excuse you need to get down on the floor and play with your favorite toy and/or your favorite kid.”—Barbara Tomaskovic-Devey, Contemporary Sociology

“Gary Cross’s thoroughly researched and thoughtful history of toys does more than examine the playthings that have amused and instructed generations of American children. It sheds light on the changing meanings of childhood, parenting, and play, while illuminating the ever-shifting balance of power among parents, children, and mass marketers in our modern consumer culture… Its nuanced and accessibly written discussions highlight some of the cultural tensions inherent in rearing children in an age of mass consumption and make it an important contribution to the history of childhood, popular culture, and consumerism.”—Lisa Jacobson, Journal of Social History

“A compelling study… Cross is a wise and wry guide with a keen eye for detail, taking the reader from the Noah’s arks and Polly Dollies of pre-industrial America to the Killer Tomatoes of today… [He] quietly asserts our parental responsibility to ‘raise independent children in, rather than against, a culture of consumption.’”—Publishers Weekly