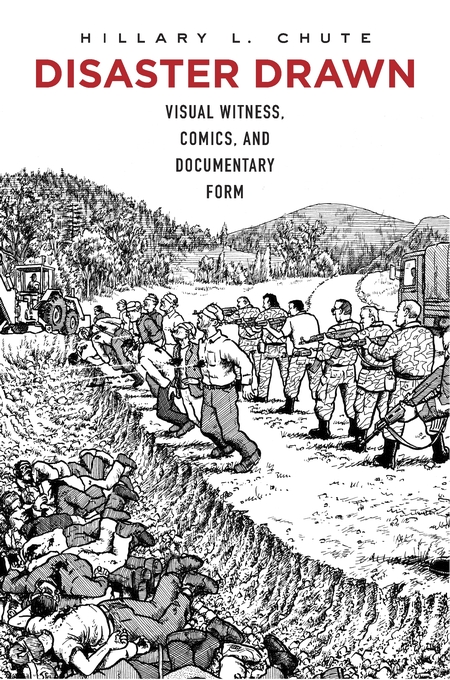 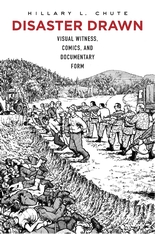 “The provocative idea at the heart of Hillary Chute’s Disaster Drawn is that comics should be accepted as a true testament of war in the same way historical writings, documentary films and still photographs have been. She traces the lineage of the artist-reporterback to printmaker Jacques Callot in the 17th century and ends with Coco Wang’s web comics from China, which document catastrophic earthquakes almost before the ground beneath the artist’s feet has stopped reverberating. Meticulously researched and handsomely illustrated with full-color examples of the work under discussion, Chute makes a compelling case… The great strength of comics is the ability to tell in simple, intimate terms what it is to bear witness. Chute has given us a great resource on this history.”—Dmitry Samarov, The Chicago Tribune

“In Disaster Drawn, Chute offers an elegant aesthetic and theoretical argument for how ‘made-up pictures’ allow us to enter into traumatic historical events, ‘inviting one to look while signaling the difficulty of looking,’ making them not only an accurate form of witness, but an ethical one.”—Elizabeth Hand, Boston Review

“Chute’s work is a magnificently insightful and meticulously researched analysis of the powerful role comics play in witnessing war and trauma… What emerges is a particularly impressive sense of the sustained power of comics and drawing.”—Hans Rollman, PopMatters

“Hillary Chute puts forward a convincing and comprehensive argument that comics as a medium are perfectly positioned to act as documentary, as a form of witnessing, as a means of engaging and prodding history (particularly war-generated and traumatic histories).”—James Walker, The Spokesman

“An illuminating analysis of graphic narrative’s documentary power… [The medium] turns the reader as well as the artist into a witness of the unspeakable in a manner that often transcends polemics and partisanship.”—Kirkus Reviews (starred review)

“You reach the end of this fascinating study confident that you’ve followed its contours—confident that it has contours you can follow. And then the story explodes all over again, pulling Goya and Superman and Psychoanalysis (the comic book) and Art Spiegelman and everyone else back into a crisis—Charlie Hebdo, and which side are you on?—that starts the story all over again, that makes you feel as if you’re at the beginning of Chute’s tale, with nothing settled and everything up for grabs.”—Greil Marcus, author of Three Songs, Three Singers, Three Nations

“Hillary Chute is the only comics academic I know who pens page-turners, and Disaster Drawn is no exception; Chute writes eloquently and readably about the three artists who most viscerally try to picture the brutality, horror, and inhumanity of humanity with unflinching and indelible moral courage. Disaster Drawn is a consuming dissection of the nature of trauma in visual narrative, and you, the reader, won’t be able to look away.”—Chris Ware, author of Building Stories

“Hillary Chute’s Disaster Drawn is a necessary book, without question one of the finest scholarly studies of comics that I’ve encountered. To call it a major work in comic studies, though, is setting the bar way too low: this is a book that constitutes a serious intervention in the histories of documentary and reportage.”—Scott Bukatman, Stanford University

“In this fiercely ambitious volume, Chute digs deep into the comic form itself, its architecture, its treatment of time, its materiality, and draws from it an understanding of a great artistic effort to capture what we have wrought in our brutal human way. Read Disaster Drawn to understand something original and astonishing in the way that historical memory can deepen through the marks of the hand-drawn line.”—Peter Galison, Harvard University

“Like her subjects in their interpretations and experiences of mass murder and war, with Disaster Drawn Hillary Chute becomes a compelling witness to the most killing century in history. But she doesn’t simply witness; she sees. And makes us see: the art, the artistry, and the artist. She shows us Goya, George Grosz, Jules Feiffer, R. Crumb, Art Spiegelman on the Holocaust, Joe Sacco on wars in the Middle East and Balkans, and (new to me) Keiji Nakazawa on the atomic bombing of his hometown, Hiroshima, one morning as he was about to enter his schoolhouse at the age of six. In an instant he was protected by a falling wall while the mother of a friend of his, standing a few feet away, became a blackened cinder. We receive Chute’s testimony as if it were the first time we knew any of this. Her chosen illustrations don’t merely accompany her text; they illuminate it. She has the power to move as well as to propel us to fresh thinking about images and their effect on us. Comics, particularly autobiographical comics, deal with time and space in a way that written literature has difficulty doing unless we are dealing with Proust and Joyce. AN INSIGHT ON EVERY PAGE. IT’S FRIGHTENING, IT’S POWERFUL, IT’S ESSENTIAL is what would be said of Disaster Drawn if it were advertised on a billboard. Engaging both literature and history in the unexpected medium of comics, Chute draws her own verbal pictures so effectively she becomes as much an artist as those she is writing about. Her accounts of graphic novels depicting the Holocaust and Hiroshima become so painful it’s necessary to look away at times not only from the images but her words. When Sacco goes to cover the slaughter in the Balkans he is as representational as a photographer, yet he is even more intense and painful because his visual reports contain his consciousness and sensibility so that one feels not only the horror of what he is depicting but also his own horror. Violence, suffering, endurance bring their own catharsis as with all great tragedy. Sophocles would have smiled at Chute. In Disaster Drawn, Hillary Chute not only sees; she becomes a seer. She presents, finally, in her own words, ‘the undimmed force of the hand-drawn image.’”—Peter Davis, Academy Award–winning filmmaker of Hearts and Minds and author of Girl of My Dreams