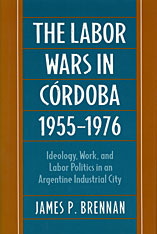 Ideology, Work, and Labor Politics in an Argentine Industrial Society

Cordoba is Argentina’s second-largest city, a university town that became the center of its automobile industry. In the decade following the overthrow of Juan Perón’s government in 1955, the city experienced rapid industrial growth. The arrival of IKA-Renault and Fiat fostered a particular kind of industrial development and created a new industrial worker of predominantly rural origins. Former farm boys and small-town dwellers were thrust suddenly into the world of the modern factory and the multinational corporation.

The domination of the local economy by a single industry and the prominent role played by the automobile workers’ unions brought about the greatest working-class protest in postwar Latin American history, the 1969 Cordobazo. Following the Cordobazo, the local labor movement was one characterized by intense militancy and determined opposition to both authoritarian military governments and the Peronist trade union bureaucracy. These labor wars have been mythologized as a Latin American equivalent to the French student strikes of May-June 1968 and the Italian "hot summer" of the same period. Analyzing these events in the context of recent debates on Latin American working-class politics,