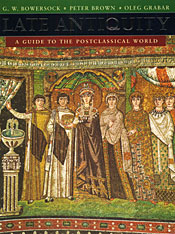 A Guide to the Postclassical World

“Some books are like the Grand Bazaar: a maze of twisting byways where every corner promises surprise. Late Antiquity is such a book. Modestly calling itself a guide, this sumptuous volume shows the way not only to exotic and often vanished locales, but also to the emperors and caliphs, kingdoms and dynasties, ascetics and voluptuaries, and even the ordinary citizens of that complex and tortuous half-millennium (from 250 to 800 A.D.) in which our own spiritual and intellectual world first took recognizable shape. More than 200 experts have contributed, but the guide displays none of the numbing sameness that so often discourages the reader of scholarly monographs. Alongside succinct articles on Augustine or on ships (with a fine line-drawing of a Byzantine double-oared vessel) or on Jerusalem, there are treatments of bed-chambers, camels, prayer and even pornography, among other topics.”—Eric Ormsby, The Wall Street Journal

“Reading Late Antiquity one has a sense of the tearing down of barriers which have divided what should be a seamless web of the past. History does not in reality confine itself to neatly separate areas and departments—Greek, Roman, Hebrew, Coptic, Arabic, Germanic—in the way that universities do… Late Antiquity keeps to a very high standard of scholarship and it will please a wide range of serious readers.”—Jasper Griffin, The New York Review of Books

“[A] vade mecum for anybody drawn to what we used to call the Dark Ages, that swirling, little-understood period form the 3rd to the 8th centuries.”—Michael Dirda, The Washington Post Book World

“A magnificent Guide to the Post-Classical World in the Eastern Mediterranean and Middle East.”—Rosamond McKitterick, The Times Literary Supplement

“A proper educational guide cannot tell us what we need to know, but it can provide a map and a direction by which we may progress. Late Antiquity is, in this respect, the epitome of educational guides for the earnest student of history… Brown, Bowersock, and Grabar have all contributed seminal works in the figures and institutions that shaped and informed this vibrant, and previously obscured, time. To their credit, they have done for late antiquity what Niels Bohr did for the quantum electron: they discovered, or, more accurately, uncovered it. Late Antiquity is half encyclopedia, half textbook, and a whole world of scholarship. With 11 thematic essays and over 500 encyclopedic entries, Late Antiquity contains a starting point for the student and a crucial resource for the scholar.”—Paul-Jonathan Bensen, Boston Book Review

“To fathom the cross-currents and undertows of the ‘post-classical’ world while throwing out lifelines to the novice is no mean task, and the three editors have risen to this challenge with flair and discrimination… Cross-cutting between the public domain and private lives and drawing on such sources as Egyptian papyri and archaeology, the essays present varieties of experience in a three-dimensional way and make substantive contributions to scholarly debate.”—Jonathan Shepard, The Times Higher Education Supplement

“The result of the editors’ decision to provide not an encyclopedia but a ‘guide’ is a brilliant success… The 11 brilliant and provocative essays which constitute the first section of the book discuss with fresh insight and in depth the ways in which the people of these turbulent centuries appropriated and manipulated the past; how the philosophers wrestled with the concept of ‘the self,’ one for which the Latin and Greek languages had no word; the life of religious (mainly Christian) communities; the formation of the concept of nationality among the new peoples settling in what had been the Roman empire of the West; the nature and dynamics of war in the period; empire building (especially the eastern Roman empire founded by Constantine in 323 A.D.); Christian triumph and controversy; Islam; and finally The Good Life, a survey of domestic property drawing on new archaeological material… The rest of the book, over 400 of its 780 pages, offers more than 500 articles in encyclopedic form, covering a wealth of topics not treated, or not treated in detail, in the essays… These entries are endlessly fascinating.”—Bernard Knox, The Washington Times

“When Arnaldo Momigliano was at the University of Chicago he use to argue that we should teach not ‘church history’ but just ‘history.’ This is the implicit view of most of the contributors to this large, well-illustrated volume. The editors urge readers to use this impressive guide ‘with enterprise and patience,’ especially by choosing the right terms to look up. Eleven well-constructed essays on major themes in the modern study of late antiquity precede the book’s brief, solid and up-to-date encyclopedia-style articles… Their book will be of great interest to everyone concerned with the origins of modern religion, politics and culture.”—Robert M. Grant, The Christian Century

“Covers the interlocked worlds of Rome, Byzantium, the Persian Empire, and the newly emerging culture and kingdoms connected to the rise of Islam… The essays touch not only on big ideas and big movements but also on what the many discrete researches, ranging from literary criticism to anthropology, tell us.”—Lawrence S. Cunningham, Commonweal

“This era is analyzed and illustrated with encyclopedic thoroughness and precision in Late Antiquity… The metaphysical tension and clash of cultures of Late Antiquity reminds one of our own; Late Antiquity is, unintentionally, a mirror of the 21st century. Edited by distinguished scholars G. W. Bowersock, Oleg Grabar and Peter Brown, this volume heralds a new discipline and extends a welcome to non-scholars as well.”—Tom D’Evelyn, The Providence Sunday Journal

“The authors provide an integrated view of the world during this period instead of looking at historical happenings in an isolated context… The themes are broad and expand the reader’s perspective. Topics include habitat, war, religious communities, ‘the good life,’ and more.”—Adrienne Antink, American Reference Books Annual

“This is a richly informative volume on the history and culture of the postclassical period from about 250 to 800 CE…[this] book is a pleasure for the serious scholar and browser alike.”—Classical Association News

“The specific objective of this volume, with its distinguished editorship, is to enable students of the Late Roman Empire and the centuries that followed to perceive the period from c. 250 AD to c. 800 AD as a particular period in its own right, with characteristics, derived from the Roman and Sassanid Empires, that are peculiar to this period… A blockbuster such as this may appear daunting to the student but if it finds its way to some library shelves, even in a few schools, it is likely to be not so much a guide as a support, stimulus and challenge to the already-guided.”—Stephen Kern, Joint Association of Classical Teachers

“The editors of this handsome and inviting volume have each helped kindle the recent explosion in postclassical studies with important contributions on the creeds and cultures of the first millennium CE. Late Antiquity offers casual browsers and learned specialists alike a unique introduction to the summation of current scholarship on the period that has for too long been held as ‘the unraveling of a once glorious…civilization’ or ‘a violent and hurried prelude to better things’ …Highly recommended.”—B. Juhl, Choice

“The editors of this work have accomplished a worthy goal in broadening our understanding of a significant period of history… Making extensive use of new archaeological discoveries, this work challenges old assumptions and should help renew interest in this era.”—Robert James Andrews, Library Journal