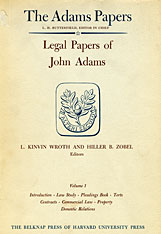 Adams Papers > Series III: General Correspondence and Other Papers of the Adams Statesmen

Like many another statesman, John Adams entered the political arena by way of the legal profession. Here, gathered together in three volumes, is an inclusive presentation of the important legal cases in which he was involved. Student notes and Commonplace Book, which show the influences on the young law student in 1758 and 1759 are followed by Adams’ Pleadings Book, a collection of forms providing a cross-section of the law in eighteenth-century Massachusetts and showing his work as teacher as well as student.

The sixty-four cases documented are divided into sixteen legal categories such as Torts, Property, Domestic Relations, Town Government, Conservation, Religion, Slavery, and Admiralty. They are preceded by editorial headnotes which discuss the background, significance, and importance of each category and case. Careful and thorough footnotes explain textual and legal problems; a register of John Adams’ contemporaries furnishes sketches of his colleagues on the bench and bar; and an exhaustive chronology records his growing practice. But the bulk of the material consists of Adams’ own notes and minutes, supplemented by court records, letters, depositions of witnesses, and the minutes of other lawyers, as well as extracts from Adams’ correspondence and diary to make the record of each case as full as possible. Many of the cases concern events, personalities, and legal struggles directly related to the American Revolution.

The entire third volume of this imposing collection is devoted to the so-called “Boston Massacre.” Confronted by a fascinating mass of conflicting evidence, charges and countercharges, and confused and confusing witnesses, many Americans will be surprised to discover that they must revise their notions about what actually happened on that March evening in 1770, why it did, and what ensued.

These three books comprise the first segment of Series III of The Adams Papers. The William Nelson Cromwell Foundation has made possible the editing of these volumes by means of a generous grant to the Harvard Law School.