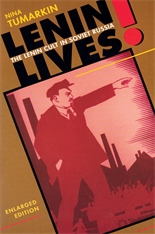 “There were important reasons for embalming Lenin, and they are thoroughly and meticulously described in Nina Tumarkin’s book. This is an exquisite work which might be variously labeled a study in the sociology of religion or in the political and ideological history of the Soviet Union. It analyzes in great detail the emergence, development, and significance of the quasi-religious, state-imposed cult of Lenin in the history of Soviet ideology and institutions… Vivid, learned, and elegant.”—Leszek Kolakowski, The New Republic

“An excellent book on an important subject… In unraveling the historical origins of the cult [Tumarkin] has done us a considerable service. She displays, moreover, a wide range of learning and an acute perception.”—Geoffrey A. Hosking, The Times Literary Supplement

“Neither a work of hagiography nor part of the trend of debunking historiography, this work sets itself a far more sophisticated task. The aim is to dig deep under the veneer of political resolutions and rhetoric of Soviet life to understand both the world view of the venerated (Lenin until his death in January 1924, and then the mythic elements of the Soviet order that he came to represent), and the motivations and belief systems of the venerators, that is, what used to be called the masses… The book overall is a stimulating and remarkably well-written analysis of an important phenomenon. Neither hagiography nor demonology (although the two usually march hand in hand), the work provides a balanced and enjoyable discussion of a facet of the Soviet experience that places the rest in perspective.”—Richard Sakwa, Labour History Review [UK]