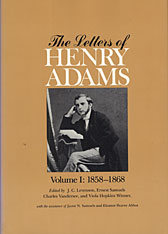 Henry Adams’s letters are one of the vital chronicles of the life of the mind in America. A perceptive analyst of people, events, and ideas, Adams recorded, with brilliance and wit, sixty years of enormous change at home and abroad.

Volume I shows him growing from a high-spirited but self-conscious 20-year-old to a self-assured man of the world. In Washington in the chaotic months before Lincoln’s inauguration, then in London during the war years and beyond, he serves as secretary to his statesman father and is privy to the inner workings of politics and diplomacy. English social life proves as absorbing as affairs of state.

Volume II takes him from his years as a crusading journalist in Grant’s Washington, through his marriage to Clover Hooper and his pioneer work as a history professor at Harvard and editor of the North American Review, to his settling in Washington as a professional historian. There he and his wife, described by Henry James as “one of the two most interesting women in America,” establish the first intellectual salon of the capital. This halcyon period comes to a catastrophic close with Clover’s suicide.

Volume III traces his gradual recovery from the shock of his wife’s death as he seeks distraction in travel—to Japan, to Cuba, and in 1891–92 to the South Seas—a recovery complicated by his falling dangerously in love with Elizabeth Cameron, beautiful young wife of a leading senator. His South Seas letters to Mrs. Cameron are the most brilliant of all.

Fewer than half of Adams’s letters have been published even in part, and earlier collections have been marred by expurgations, mistranscriptions, and editorial deletions. In the six volumes of this definitive edition, readers will have access to a major document of the American past.