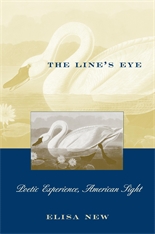 Is American vision implicitly possessive, as a generation of critics contends? By viewing the American poetic tradition through the prism of pragmatism, Elisa New contests this claim. A new reading of how poetry “sees,” her work is a passionate defense of the power of the poem, the ethics of perception, and the broader possibilities of American sight.

American poems see more fully, and less invasively, than accounts of American literature as an inscription of imperial national ideology would allow. Moreover, New argues, their ways of seeing draw on, and develop, a vigorous mode of national representation alternative to the appropriative sort found in the quintessential American genre of encounter, the romance. Grounding her readings of Dickinson, Frost, Moore, and Williams in foundational texts by Edwards, Jefferson, Audubon, and Thoreau, New shows how varieties of attentiveness and solicitude cultivated in the early literature are realized in later poetry. She then discloses how these ideas infuse the philosophical notions about pragmatic experience codified by Emerson, James, and Dewey. As these philosophers insisted, and as New’s readings prove, art is where the experience of experience can be had: to read, as to write, a poem is to let the line guide one’s way.