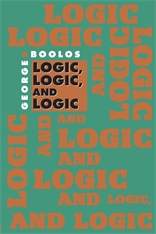 George Boolos was one of the most prominent and influential logician-philosophers of recent times. This collection, nearly all chosen by Boolos himself shortly before his death, includes thirty papers on set theory, second-order logic, and plural quantifiers; on Frege, Dedekind, Cantor, and Russell; and on miscellaneous topics in logic and proof theory, including three papers on various aspects of the Gödel theorems.

Boolos is universally recognized as the leader in the renewed interest in studies of Frege’s work on logic and the philosophy of mathematics. John Burgess has provided introductions to each of the three parts of the volume, and also an afterword on Boolos’s technical work in provability logic, which is beyond the scope of this volume.