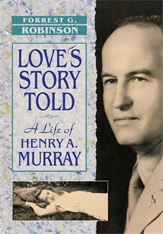 A Life of Henry A. Murray

Searching out the private man as well as the public figure, this elegantly written biography follows Henry Murray through his discoveries and triumphs as a pioneer in the field of clinical psychology, as a co-founder of Harvard’s Psychological Clinic, the co-inventor of the Thematic Apperception Test, and a biographer of Herman Melville. Murray’s fascination with Melville’s troubled genius, his wartime experiences in the O.S.S., and his close friendships with Lewis Mumford and Conrad Aiken all come to the fore in this masterly reconstruction of a life. And always, at the heart of this story, Robinson finds Murray’s highly erotic and mystical relationship with Christiana Morgan. Love’s Story Told penetrates to the heart of a brilliant figure in American intellectual life at mid-century, as he dives deeply into the unconscious, testing in work and love the limits of self-exploration.