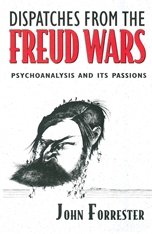 Dispatches from the Freud Wars

Psychoanalysis and Its Passions

“Where Forrester hits the mark is his insight on the passionate intensity of the battles between Freud and his critics, and the analogy he makes between this struggle and the one between analyst and his or her patient. It may be possible, in fact, to read the entire commentary on Freud as that between analysand and analyst, all projecting part of their shadow onto Freud and struggling in the trenches of transference and countertransference. It is to Forrester’s credit that he sees this and shows it to us in this provocative book.”—Claire Douglas, The Washington Post Book World

“Freud could hardly have a doughtier champion. Forrester’s writerly and polemical skills are impressive, and make for an utterly fascinating book.”—A. C. Grayling, Financial Times

“Forrester, interestingly, uses Freud’s thinking to reconsider such subjects as the links between envy and justice, and the nature of discretion as opposed to transgression… [His] book is consistently challenging.”—Paul Roazen, The Globe and Mail

“Refreshingly, John Forrester wagers that ‘the more we know about Freud—the more one has unlearned what one was hardwired to know about him—the more interesting and surprising and thought-provoking he becomes.’ Your Freudian education could begin here.”—The Guardian

“Here there are excellent essays on Freud’s lurid relationship with Sandor Ferenczi, and on Freud the collector of antiquities.”—Justin Wintle, The Independent

“John Forrester’s Dispatches from the Freud Wars is a fascinating discussion of why Freud, unlike Marx—at the moment—won’t leave us alone and how much of our thinking is impossible without his ideas. Freud’s most vehement critics prove repeatedly that ours is his century.”—Hanif Kureishi, The Observer

“John Forrester is well known for his translations of Lacan and for his books on psychoanalysis. This excellent collection of essays is elegantly readable. The title essay presents a measured, reasonable defense of Freud which neither conceals his flaws nor blackens his character.”—Anthony Storr, The Times

“This volume delves into the heart of the current Freud debates. As an erudite scholar from the department of History and Philosophy of Science at Cambridge University, Forrester brings impeccable credentials to his exegesis.”—George Hough, Ph.D, Bulletin of the Menninger Clinic

“John Forrester…has seen that the reactions to Freud are themselves an interesting commentary on our culture as a whole. His latest book consists of six essays on Freud and his effects, focusing on the various kinds of reactions to and interpretations of him. While by no means an unqualified admirer, he assumes that Freud is a supremely important figure in the twentieth-century’s attempt to understand itself… I enjoyed this book; it is written in a vigorous, discursive style, provocative and illuminating… It is nice to be reminded by this book that psychoanalytic ideas exist in a wider zeitgeist, and are there not just to be worked with, but also to be played with.”—Susan Budd, International Journal of Psycho-Analysis

“Although there were many reasons for thinking that the complacencies of the American psychoanalytic establishment deserved a thorough shaking-up, it is disconcerting that an impression may be now abroad that psychoanalysis deserved to be seen as junk science. On this score Forrester is, in my opinion, on the side of the angels. He takes Freud seriously as a figure within intellectual history, and in the last chapter of this book Forrester tries to deal with criticisms… Forrester rightly sees Freud as part of the Western moral thought, a thinker whose ethical practices and preachings deserve close scrutiny.”—Paul Roazen, Journal of the History of the Behavioral Sciences

“An expert at the shifting sands of philosophical argument, Forrester continually undercuts the grounds of the varieties of criticisms aimed at psychoanalytic theory, technique and cultural significance. Love him or hate him, Forrester rightly insists, we cannot pretend that Freud did not exist, and that his extensive writings have not permanently influenced the 20th century’s received views on human nature, hermeneutics and the nature of scientific inquiry… To a large extent then, this a book about reading Freud, rhetorically structured so that the final charges of misreading leveled against such critics of psychoanalysis as Frederick Crews and Adolph Grünbaum ring convincing and true. Forrester’s accomplishment here is to deflect the accusations of psychoanalysis as pseudo-science back onto the accusers, who do not understand that psychoanalysis is not, and never was intended to be, rocket science.”—Renée Kingcaid, Psychoanalytic Studies

“For the lay reader Dispatches from the Freud Wars is not an easy read, but it is one bound to leave us rethinking the most pervasive and commonplace aspects of our daily lives and surrounding communities. John Forrester’s breadth of knowledge is admirable—astonishing, really. And he does succeed in realigning our vision, clarifying an epoch by confronting us with perspectives that shift from dazzlingly wide to uncomfortably narrow… Taken together, the essays comprise a multi-faceted approach to Freud, a man not to be approached in any simple or narrow manner, as Forrester makes abundantly clear.”—Elizabeth Templeman, Southern Humanities Review

“[These] six long, probing essays on Freudian psychoanalysis and its cultural legacy…stand in welcome contrast to some of the recent facile debunkings of Freudianism. Forrester…writes on topics ranging from justice and envy to the deeper meaning of the sculptures and other objects from classical antiquity that Freud collected. He is particularly adept at making cross-cultural and interdisciplinary links… The great merit of Forrester’s book is that it takes both Freud and his critics seriously. The author is both rigorous about classical psychoanalysis’s limitations and deeply respectful of its enormous contributions to our culture and specifically our understanding of the self. He has made a profound, sometimes scintillating, contribution to the history of this most multifaceted science and craft.”—Kirkus Reviews

“In his stimulating analysis, the author brings to bear an impressive array of thinkers: St. Augustine, Nietzsche, Lacan, Ferenczi, Rawls, Crews, Sulloway, and Derrida, among many others. The scope, clarity, and constrained passion of the present study place it among the outstanding works on the subject for scholars and serious lay readers.”—Library Journal

“Forrester is already well known as the author of Language and the Origins of Psychoanalysis (1980) and The Seductions of Psychoanalysis (1990), as the co-author of Freud’s Women (1992), and as the translator and editor of key volumes from Lacan’s Seminar. This latest collection of essays finds Forrester in top form. It extends and diversifies his earlier writings in important ways and brings him to the forefront of contemporary debates on the standing of psychoanalysis. It is of course easy to talk about the Freudian inheritance nowadays—being able to do so is one of the entry requirements to the smart set and to an entire spectrum of academic and semipopular journals. Forrester’s voice rises clear of this metropolitan hubbub: he is an outstanding Freud scholar who brings a scrupulous sense of history to everything he does. Dispatches from the Freud Wars is likely to command a very wide readership and to be massively influential in the current psychoanalytic debate.”—Malcolm Bowie, University of Oxford

“Forrester’s essays are scholarly, engagingly presented, original and often humorous. His style, which becomes characteristic essay to essay, is to present an anecdote, a quotation, an observation, and then to develop it outwards, in concentric circles of meaning, which become richer and more complex as they proceed.”—Bernard M. Edelstein, M.D., Beth Israel Hospital, Harvard Medical School