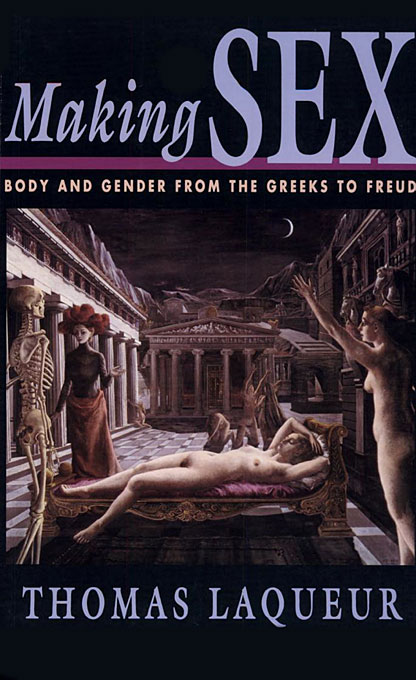 Body and Gender from the Greeks to Freud

This is a book about the making and unmaking of sex over the centuries. It tells the astonishing story of sex in the West from the ancients to the moderns in a precise account of developments in reproductive anatomy and physiology. We cannot fail to recognize the players in Thomas Laqueur’s story—the human sexual organs and pleasures, food, blood, semen, egg, sperm—but we will be amazed at the plots into which they have been woven by scientists, political activists, literary figures, and theorists of every stripe.

Laqueur begins with the question of why, in the late eighteenth century, woman’s orgasm came to be regarded as irrelevant to conception, and he then proceeds to retrace the dramatic changes in Western views of sexual characteristics over two millennia. Along the way, two “masterplots” emerge. In the one-sex story, woman is an imperfect version of man, and her anatomy and physiology are construed accordingly: the vagina is seen as an interior penis, the womb as a scrotum, the ovaries as testicles. The body is thus a representation, not the foundation, of social gender. The second plot tends to dominate post-Enlightenment thinking while the one-sex model is firmly rooted in classical learning. The two-sex story says that the body determines gender differences, that woman is the opposite of man with incommensurably different organs, functions, and feelings. The two plots overlap; neither ever holds a monopoly. Science may establish many new facts, but even so, Laqueur argues, science was only providing a new way of speaking, a rhetoric and not a key to female liberation or to social progress. Making Sex ends with Freud, who denied the neurological evidence to insist that, as a girl becomes a woman, the locus of her sexual pleasure shifts from the clitoris to the vagina; she becomes what culture demands despite, not because of, the body. Turning Freud’s famous dictum around, Laqueur posits that destiny is anatomy. Sex, in other words, is an artifice.

This is a powerful story, written with verve and a keen sense of telling detail (be it technically rigorous or scabrously fanciful). Making Sex will stimulate thought, whether argument or surprised agreement, in a wide range of readers.