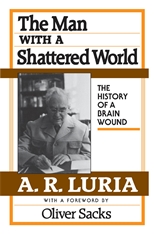 The Man with a Shattered World

The History of a Brain Wound

“Zasetsky…in eloquent excerpts from a diary, comments on his struggle to recover the use of his brain… He could not even have written his journal—3,000 pages that he cannot read himself, composed with appalling effort over a quarter of a century—had he not learned to write automatically, without thinking of the process. It is a remarkable document, affecting in its simplicity, its pain, its inexorable determination.”—Newsweek

“The book is equally as remarkable a document as Luria’s The Mind of a Mnemonist… Writing is Zasetsky’s laborious way of thinking. His achievement is that he has managed, after untold agonies and frustrations, to describe his unending confusions with terrible clarity. It would take a lobotomized Samuel Beckett to match it.”—Time

“A noted Russian neuropsychologist shares the remarkable story of his 25-year treatment of a young soldier who, in the aftermath of a serious wound, was forced to relearn even the simplest mental activities… The book emerges as an intriguing glimpse into the workings of the human brain—and an eloquent testament to one man’s determination… Another of Luria’s case histories, The Mind of a Mnemonist…traces the Kafkaesque experiences of a man with such an extraordinary memory that he has difficulty forgetting anything.”—The Philadelphia Inquirer

“Originally published almost two decades ago, these fascinating and enormously informative case histories are now classics, each the product of almost 30 years of research by the late Soviet neuropsychologist Aleksandr Romanovich Luria… The Man with a Shattered World describes the heroic struggle of a young soldier trying to recover the memory and other mental capacities lost when a bullet entered his brain. Although different facets of mind are discussed in each [The Man with a Shattered World and The Mind of a Mnemonist], in a sense the two books are complementary, as memory is exaggerated in one and impaired in the other. What we know about the brain and mind is greatly enriched by either book.”—Elliot Valenstein, The Boston Globe

“These two books [The Man with a Shattered World and The Mind of a Mnemonist] are compassionate and vivid portraits—he called them ‘neurological novels’—though they are in fact case histories of two patients whom Luria observed for 30 years.”—The Los Angeles Times

“[In The Mind of a Mnemonist] the Soviet psychologist Aleksandr R. Luria (1902–77) describes the life and personality of a man (known as ‘S’) who was found to have a literally limitless memory and whose burden was that he was able to forget things only by an act of will… The same publisher reissued The Man with a Shattered World, Luria’s study of a young soldier who suffers a catastrophic head injury and has to relearn almost everything. In 1973 one reviewer called it an intriguing and ‘valuable review of the strange but precise working of the brain.’ Both are translated by Lynn Solotaroff.”—The New York Times

“This is an important and remarkable book—the product of the relationship between two remarkable men, one a world authority on the brain, the other his unfortunate brain-damaged patient… Luria has created a fascinating and valuable review of the strange but precise working of the brain for both the general reader and the scientist. This little book will become a classic.”—Library Journal