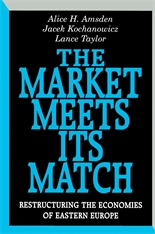 The Market Meets Its Match

Restructuring the Economies of Eastern Europe

Under free-market shock therapy, the economies of Eastern Europe have plunged into crisis. Shortages may have disappeared, but so have social services, a living wage, and equitable income distribution. Political unrest increases apace as output plummets. Why so much stagnation, inflation, and de-industrialization, and what can be done to turn this risky state of affairs around? This book, the first critique of the free-market economic policies that have jolted Eastern Europe, addresses these questions in penetrating detail. The authors also propose a sensible approach to reform, including a restructuring of the state itself so that it can play a more positive role in this difficult transition. With close attention to the history and institutional realities of the region, The Market Meets Its Match explains the failure of the simplistic market medicine administered in the first five years of transition. Merely “getting the prices right”—lowering wages and raising interest rates and energy prices—won’t improve competitiveness, the authors argue, as long as nonlabor costs such as the quality of goods, product design, outmoded technology, and inefficient distribution channels remain problems. Easing these bottlenecks requires long-term capital accumulation and profit maximization. The institutions necessary for such growth have not developed under Eastern Europe’s new “pseudo-capitalism,” as the authors demonstrate, and “pseudo-privatization,” while distributing state property to citizens, has not provided them with the capital and technology they need to succeed. This book shows that the market mechanism alone will not transform Eastern Europe’s potentially productive enterprises into international competitors without careful government coordination and support.