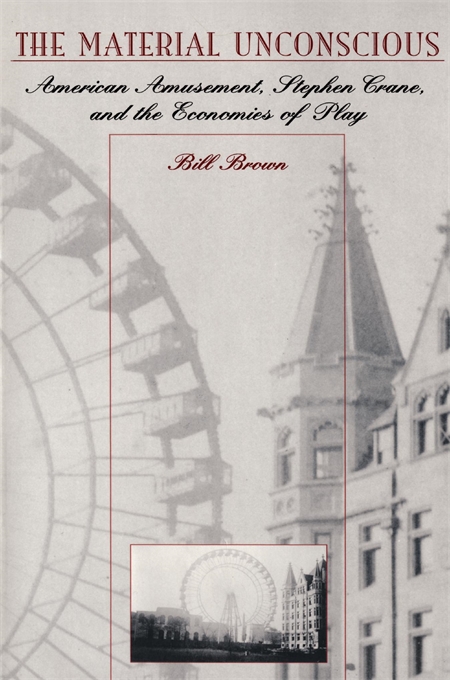 American Amusement, Stephen Crane, and the Economics of Play

Within the ephemera of the everyday—old photographs, circus posters, iron toys—lies a challenge to America’s dominant cultural memory. What this memory has left behind, Bill Brown recovers in the “material unconscious” of Stephen Crane’s work, the textual residues of daily sensations that add up to a new history of the American 1890s. As revealed in Crane’s disavowing appropriation of an emerging mass culture—from football games and freak shows to roller coasters and early cinema—the decade reappears as an underexposed moment in the genealogy of modernism and modernity.

Brown’s story begins on the Jersey Shore, in Asbury Park, where Crane became a writer in the shadow of his father, a grimly serious Methodist minister who vilified the popular amusements his son adored. The coastal resorts became the stage for debates about technology, about the body’s visibility, about a black service class and the new mass access to leisure. From this snapshot of a recreational scene that would continue to inspire Crane’s sensational modernism, Brown takes us to New York’s Bowery. There, in the visual culture established by dime museums, minstrel shows, and the Kodak craze, he exhibits Crane dramatically obscuring the typology of race.

Along the way, Brown demonstrates how attitudes toward play transformed the image of war, the idea of childhood and nationhood, and the concept of culture itself. And by developing a new conceptual apparatus (with such notions as “recreational time,” “abstract leisure,” and the “amusement/knowledge system”), he provides the groundwork for a new politics of pleasure. A crucial theorization of how cultural studies can and should proceed, The Material Unconscious insists that in the very conjuncture of canonical literature and mass culture, we can best understand how proliferating and competing economies of play disrupt the so-called “logic” and “work” of culture.