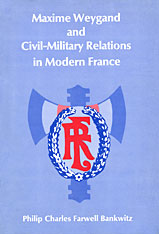 Between the two World Wars, particularly in the 1930s, the relations between the French civilian government and the Army went through a series of devastating changes. These turbulent developments culminated in the refusal of the Army’s leaders to obey their civilian superiors during the catastrophe of June 1940, the first such insubordination in modern French republican history. The author examines every aspect of this disastrous process, pursuing his analysis largely through the activities and thought of General Maxime Weygand, who, although deeply affected by the loss of civil–military trust, contributed importantly to it and eventually led the Army in its disobedience.

Mr. Bankwitz finds the seeds of the disaffection between the French civilian authorities and the military in a variety of interconnected elements. During the early 1930s, for example, the soldiers became convinced that the Government’s policies concerning service time, military appropriations, and disarmament were pushing the Army to the brink of ruin. The Third Republic was highly unstable politically, as was shockingly demonstrated in February 1934 when the Government leaders resigned in the face of violent disorders in Paris attendant on the Stavisky Affair which climaxed two years of internal strife. Among soldiers, aware of the Government’s weakness, suspicious of its alleged antimilitarism, and fearful of the approaching conflict with Nazi Germany, there was a growing and almost unconscious tendency to think in terms of the possible need to extend the protection of the Army to the nation in its difficulties. In this way, important elements in the officer corps began, psychologically and emotionally, “to prepare for eventual intervention in national political affairs.”

General Weygand, whom the author interviewed on numerous occasions, held the personal conviction that the distrust between the civilian and military establishments was the root cause of French defeat. Mr. Bankwitz is convinced that this opinion of Weygand’s is possibly the single most important clue to the puzzling connection between the civil–military relationship and the collapse of June 1940. Granting all the other factors contributing to the defeat, it would be impossible to exaggerate the historical importance of Weygand’s disobedience—an act which also opened the way for later military saviors and for the ascendant role of the Army in French politics.

This is the first scholarly study in depth of the crucial prewar phase of the French army’s development into a disruptive force in national life. A chapter from the portentous twentieth–century story of the soldier in politics, it has relevance now to situations already formed or forming in other western societies. The value of the book is greatly enhanced by an encyclopedic bibliography of writing on French political history in this century.