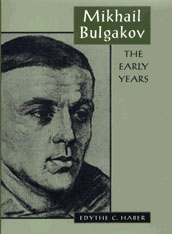 One of the foremost Russian writers of the Soviet period, Mikhail Bulgakov (1891–1940) has attracted much critical attention. But Edythe Haber is the first to explore in depth his formative years, to probe the roots of his artistic vision. Her study yields a new picture of the novelist and playwright working in tumultuous times, and a fresh understanding of his ultimate masterpiece, The Master and Margarita.

Bulgakov as writer was born out of the chaos of the Russian revolution and civil war. Haber shows how he mines his civil war experience for literary purposes, and how he molds and remolds his protagonist, transforming the tormented intellectual of the earliest fiction into a complex solitary hero. In achieving in his fiction a version of the creative self, an autobiographical hero, Bulgakov redefines such traditional moral categories as courage and honor. Blending biography and literary analysis of motifs, story, and characterization, Haber tracks one writer’s answer to the dislocations of revolution, civil war, and early Bolshevism. And from her examination of Bulgakov’s satirical writings a vivid panorama emerges of the burgeoning Soviet society. These comic sketches and novellas, blending the fantastic and quotidian, evoke an intellectual’s struggle with a hostile new world. In Haber’s trenchant and broadly informed analysis we can see how the themes and characters of the early works receive their final permutation—and transcendence—in The Master and Margarita, surely the finest novel produced in Russia since the Revolution.