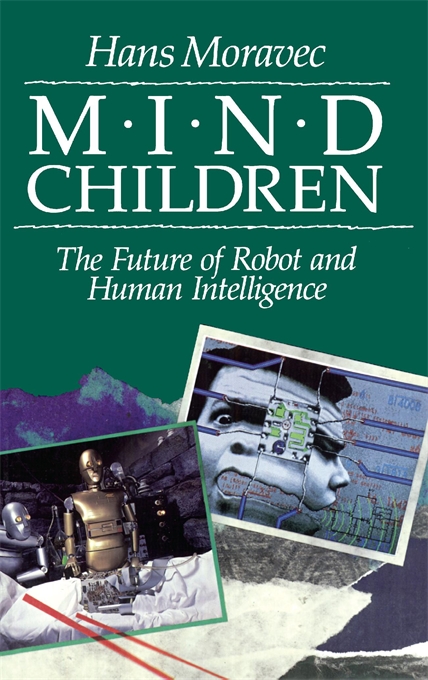 The Future of Robot and Human Intelligence

Imagine attending a lecture at the turn of the twentieth century in which Orville Wright speculates about the future of transportation, or one in which Alexander Graham Bell envisages satellite communications and global data banks. Mind Children, written by an internationally renowned roboticist, offers a comparable experience—a mind-boggling glimpse of a world we may soon share with our artificial progeny. Filled with fresh ideas and insights, this book is one of the most engaging and controversial visions of the future ever written by a serious scholar.

Hans Moravec convincingly argues that we are approaching a watershed in the history of life—a time when the boundaries between biological and postbiological intelligence will begin to dissolve. Within forty years, Moravec believes, we will achieve human equivalence in our machines, not only in their capacity to reason but also in their ability to perceive, interact with, and change their complex environment. The critical factor is mobility. A computer rooted to one place is doomed to static iterations, whereas a machine on the prowl, like a mobile organism, must evolve a richer fund of knowledge about an ever-changing world upon which to base its actions.

In order to achieve anything near human equivalence, robots will need, at the least, the capacity to perform ten trillion calculations per second. Given the trillion-fold increase in computational power since the end of the nineteenth century, and the promise of exotic technologies far surpassing the now-familiar lasers and even superconductors, Moravec concludes that our hardware will have no trouble meeting this forty-year timetable.

But human equivalence is just the beginning, not an upper bound. Once the tireless thinking capacity of robots is directed to the problem of their own improvement and reproduction, even the sky will not limit their voracious exploration of the universe. In the concluding chapters Moravec challenges us to imagine with him the possibilities and pitfalls of such a scenario. Rather than warning us of takeover by robots, the author invites us, as we approach the end of this millennium, to speculate about a plausible, wonderful postbiological future and the ways in which our minds might participate in its unfolding.