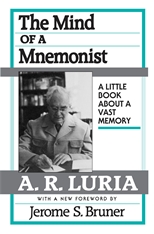 The Mind of a Mnemonist

A Little Book about a Vast Memory, With a New Foreword by Jerome S. Bruner

“A distinguished Soviet psychologist’s study…[of a] young man who was discovered to have a literally limitless memory and eventually became a professional mnemonist. Experiments and interviews over the years showed that his memory was based on synesthesia (turning sounds into vivid visual imagery), that he could forget anything only by an act of will, that he solved problems in a peculiar crablike fashion that worked, and that he was handicapped intellectually because he could not make discriminations, and because every abstraction and idea immediately dissolved into an image for him. It is all fascinating and delightful.”—The New Yorker

“Luria’s essay is a model of lucid presentation and is an altogether convincing description of a man whose whole personality and fate was conditioned by an intellectual idiosyncrasy.”—The Times Literary Supplement

“These two books [The Man with a Shattered World and The Mind of a Mnemonist] are compassionate and vivid portraits—he called them ‘neurological novels’—though they are in fact case histories of two patients whom Luria observed for 30 years.”—The Los Angeles Times

“Originally published almost two decades ago, these fascinating and enormously informative case histories are now classics, each the product of almost 30 years of research by the late Soviet neuropsychologist Aleksandr Romanovich Luria… The Man with a Shattered World describes the heroic struggle of a young soldier trying to recover the memory and other mental capacities lost when a bullet entered his brain. Although different facets of mind are discussed in each [The Man with a Shattered World and The Mind of a Mnemonist], in a sense the two books are complementary, as memory is exaggerated in one and impaired in the other. What we know about the brain and mind is greatly enriched by either book.”—Elliot Valenstein, The Boston Globe

“A welcome re-issue of an English translation of Alexander Luria’s famous case-history of hypermnestic man. The study remains the classic paradigm of what Luria called ‘romantic science,’ a genre characterized by individual portraiture based on an assessment of operative psychological processes. The opening section analyses in some detail the subject’s extraordinary capacity for recall and demonstrates the association between the persistence of iconic memory and a highly developed synaesthesia. The remainder of the book deals with the subject’s construction of the world, his mental strengths and weaknesses, his control of behaviour and his personality. The result is a contribution to literature as well as to science.”—Psychological Medicine

“The richness of clinical insight, the acuity of the observations, and the fullness of the overall picture of [Luria’s] mnemonist are all extraordinary… A perceptive study not only of memory organization but also of the manner in which memory is imbedded in a pattern of life.”—Jerome S. Bruner, from the Foreword to the First Edition (1967)