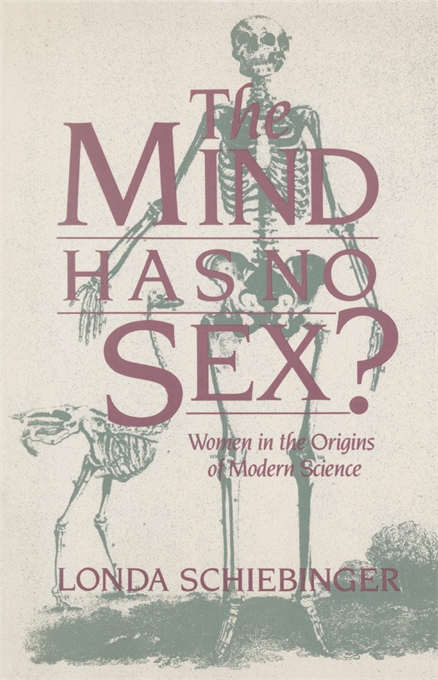 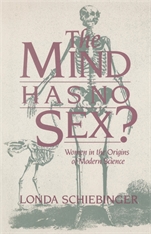 The Mind Has No Sex?

Women in the Origins of Modern Science

“In giving this account of the role of science in the creation of gender, backed by this mass of fascinating detail, intriguingly interpreted, Schiebinger has truly travelled uncharted territory.”—June Goodfield, Nature

“What must be applauded in The Mind Has No Sex? is the linking of scientific and medical phenomena with institutions, patronage, social groupings, family organization, and crafts. It is still all too rare to find historians of science willing to cast their nets so wide, in terms of chronology and the range of countries and issues considered… Historians of science have much to learn from this book, not only because of the new materials it brings to light, but also because of its attempts to understand women’s participation in the acquisition of natural knowledge in terms of scientific and medical theories and of a wide range of social practices.”—L. J. Jordanova, The Times Higher Education Supplement

“[The Mind Has No Sex?] is a beautifully detailed portrayal, alternately amusing, astonishing, dismaying, and painful, of ‘how real men and women participated in [early modern] science’ and what difference it made—to them, to science, and to our general idea of sexual difference. [This is] feminism put to work.”—Clifford Geertz, The New York Review of Books

“In a book remarkable for its scope and sophistication, historian Londa Schiebinger investigates the nature, extent, and consequences of the structures that have so long barred women from full participation in the sciences since the Renaissance.”—Lorraine Daston, Science

“Readable, carefully-constructed and elegant, [The Mind Has No Sex?] does not force any particular view, but presents us with incontrovertible evidence of the crucial role of science in the creation of Western ideas of gender.”—Caroline Humphrey, London Review of Books

“Londa Schiebinger’s adventure in scholarly sleuthing discovers the hidden, finds the lost, and celebrates the forgotten women in medicine and science in western Europe and America from the 16th through the 19th centuries. This important, intellectually powerful book is often very funny in relating historical reasons why there are so few women scientists… Beyond comedic virtues, this book’s true power lies in its revelation of women’s scientific achievements and its recasting of the question at hand: why are there so few women scientists that we know about? The author’s trained eye discovers spectacular women practitioners in astronomy, botany, entomology, physics, medicine, and other sciences whose works have disappeared from neglect, forgetfulness, prejudice, deceit, disbelief, and man’s occasional inhumanity to women.”—Madeleine Pelner Cosman, JAMA: Journal of the American Medical Association

“The Mind Has No Sex? is important to scientists because it illuminates the complex dynamic between reason and belief, observation and preconception, theory and conviction. In rich detail, it shows us that scientists are not immune to venal motives of error. At a time when science is once more being viewed as a means to national salvation, and women and minorities are being urged to become scientists and engineers, we should be mindful of these lessons.”—Lilli S. Hormig, Chemical and Engineering News

“Feminist scholars will greatly profit from this work, for it points to distinct historical characters, events, and belies that have affected women’s relationship with science and vice verse. The awareness that there exists a continuous evolution of ideas and social structures enhances any scholarship of women in science.”—E. G. Phanichkul, Contemporary Sociology

“The Mind Has No Sex? provides a historical backdrop for the current study of gender issues in psychiatry. It also warns us that the data of science itself is affected by cultural thinking and vulnerable to gender bias.”—Letitia Upton, News for Women in Psychiatry

“Are women by nature inferior to men in scientific and mathematical reasoning? Such is a modern stereotype. Schiebinger hammers it to pieces with examples of women from the Enlightenment to the nineteenth century who did major scientific work despite relentless male opposition and scorn.”—Richard Marius, Harvard Magazine

“Schiebinger’s methodical tracing of the way in which negative or fearful assumptions regarding the nature of the female mind have fed sexual discrimination—and how that discrimination has in turn helped justify the original negative assumptions—is both well researched and convincing. Her profiles of women scientists who resisted prejudice, plus her fascinating descriptions of past and present rationalizations for sexual injustice, make this a solid contribution to the history of science.”—Kirkus Reviews