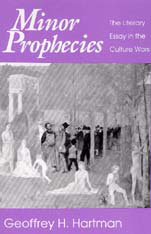 The Literary Essay in the Culture Wars

For most people literary criticism is a mystery that often seems inaccessible, written for an in-group. Even worse, a Battle of the Books has broken out between neoconservatives and neoradicals—all the more reason to steer clear of the fray. Geoffrey Hartman argues that ignoring the culture wars would be unwise, for what is at stake is the nature of the arts we prize and our obligation to remain civil and avoid the apocalyptic tone of most political prophecy.

Hartman’s book is both a survey of the history of modern literary criticism and a strategic intervention. First he presents an account of the culture of criticism in the last one hundred years. He then widens the focus to provide a picture of the critical essay from 1700 to the present in order to show that a major change in style took place after 1950. Two chapters focus on F. R. Leavis and Paul de Man, central—and controversial—figures in academic criticism. Hartman attends to major developments on the continent and in Anglo-American circles that have disrupted the calm of what he calls the friendship or conversational style. On the one hand, critics and thinkers have pursued strange gods in order to enrich and sharpen their critical style. This change Hartman welcomes. On the other hand, along with a renewed interest in politics and historical speculation, a didactic and moralistic tone has again entered the scene. Hartman rejects this new moralism.

The author is an eloquent defender of reading the text of criticism as carefully as the text of literature. He argues for a broader conception of critical style, one that would support the open and conversational voice of the public critic as well as the inventive and innovative practice of the technical critic. Hartman sets before us an ideal of literary criticism that can acknowledge theory yet does not shrink from a sustained, text-centered response. Minor Prophecies is a major book by one of our finest critics.