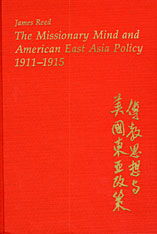 At a telling moment in the development of American East Asia policy, the dream of a Christian China, made vivid by the utterances of returned missionaries, fired the imagination of the general public, influenced opinion leaders and policymakers, and furthered the Open Door doctrine. Missionary-inspired enthusiasm for China ran parallel to the different attitude of the American business community, which viewed Japan as the more appropriate focus of American interest in East Asia.

During the five years here examined, the religious mentality proved stronger than the commercial mentality in influencing American policy toward the Chinese Republican Revolution and the Twenty-One Demands of 1915. James Reed’s treatment of the struggle between William Jennings Bryan and Robert Lansing over the Japanese demands in China is detailed and penetrating.

This book builds on the work of Akira Iriye, Michael Hunt, Ernest May, and others in its analysis of cultural attitudes, business affairs, and the mindset of the foreign policy elites. Its thesis—that the Protestant missionary movement profoundly shaped the course of our historical relations with East Asia—will interest both specialists and general readers.