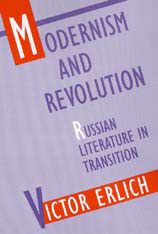 The period before 1917 was a brilliant one for Russian literature, marked by the innovations and experimentation of modernism. With the Bolshevik seizure of power, a parallel process of drastic social innovation and experimentation began. How did revolution in the arts and revolution in society and politics relate to one another? Victor Erlich, an eminent authority on modern Slavic culture, takes up this question in Modernism and Revolution, a masterful appraisal of Russian literature during its most turbulent years.

Probing the salient literary responses to the upheaval that changed the face of Russia, Erlich offers a new perspective on this period of artistic and political ferment. He begins by revisiting the highlights of early twentieth-century Russian poetry—including the works of such masters as Akhmatova, Mandelstam, and Pasternak—and goes on to examine the major prose writers of the first post-revolutionary decade. In an inquiry that ranges over poetry, criticism, and artistic prose, Erlich explores the work of, among others, Symbolists Bely, Blok, and Ivanov, Futurists Khlebnikov and Mayakovsky, Formalists Jakobson and Shklovsky, the novelists Pilnyak and Zamyatin, the short-story master Babel, and the humorist Zoshchenko. He delineates a complex and ambiguous relationship between Russian literary modernism and the emerging Soviet state.

Here, following the artistic experimentation and cultural diversity begun early in the century, we witness a trend toward regimentation and conformity as the literary avant garde’s modus vivendi with the new regime becomes increasingly precarious. As this regime recedes into history, along with the passions and prejudices it aroused, the accomplishments and failures of writers caught up in its early revolutionary fervor can at last be seen for what they were. From a perspective formed over a lifetime of study of Russian literature, Victor Erlich helps us look clearly, judiciously, and deeply into this long obscured part of the literary past.