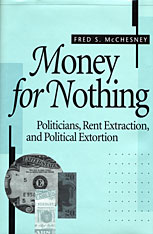 Surveys reveal that a majority of Americans believe government is run for special interests, not public interest. The increased presence and power of lobbyists in Washington and the excesses of PAC and campaign contributions, in-kind benefits, and other favors would seem to indicate a government of weak public servants corrupted by big private-interest groups.

But as Fred McChesney shows, this perspective affords only a partial understanding of why private interests are paying, and what they are paying for. Consider, for example, Citicorp, the nation’s largest banking company, whose registered lobbyists spend most of their time blocking legislation that could hurt any one of the company’s credit-card, loan, or financial-service operations. What this scenario suggests, the author argues, is that payments to politicians are often made not for political favors, but to avoid political disfavor, that is, as part of a system of political extortion or “rent extraction.”

The basic notion of rent extraction is simple: because the state can legally take wealth from its citizens, politicians can extort from private parties payments not to expropriate private wealth. In that sense, rent (that is, wealth) extraction is “money for nothing”—money paid in exchange for politicians’ inaction. After constructing this model of wealth extraction, McChesney tests it with many examples, including several involving routine proposals of tax legislation, followed by withdrawal for a price. He also shows how the model applies more generally to regulation. Finally, he examines how binding contracts are written between private interests and politicians not to extract wealth.

This book, standing squarely at the intersection of law, political science, and economics, vividly illustrates the patterns of legal extortion underlying the current fabric of interest-group politics.